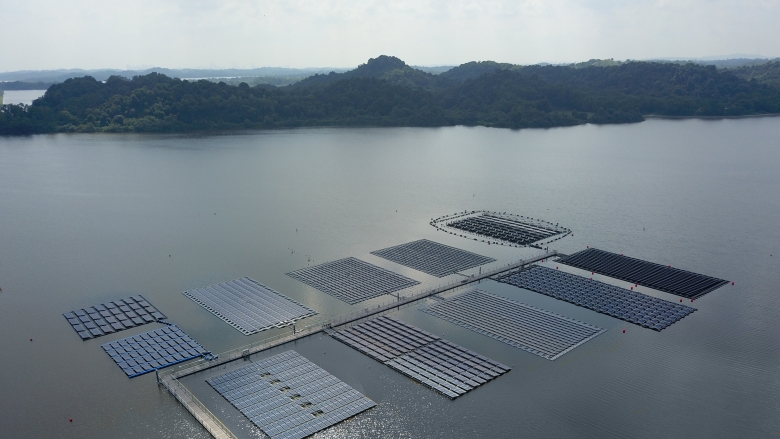 A first-of-its kind report series on floating solar technologies, “Where Sun Meets Water,” aims to help policymakers, private developers and practitioners understand the market potential, costs and policy implications of floating solar, as well as the challenges to overcome to get this emerging technology off the ground.

Floating solar – the installation of solar photovoltaic panels floating on the surface of lakes, hydropower reservoirs, agriculture reservoirs, industrial ponds, and near-coastal areas – is one of the fastest-growing power generation technologies today. It opens new horizons to scale up of solar power globally, particularly in countries with land constraints.

The capacity for floating solar is growing exponentially. At the end of 2014, total global installed capacity stood at 10 megawatts (MW). As of September 2018, that figure had grown more than 100-fold, to 1.1 GW. The new report series estimates the global potential of floating solar, even under conservative assumptions, to be 400 gigawatts or roughly the total capacity of solar photovoltaic installed worldwide at the end of 2017.

The greatest advantage of floating solar is that it avoids land acquisition and site preparation issues associated with traditional solar installations. In some cases, floating solar allows for power generation to be sited much closer to areas where demand for electricity is high. This makes the technology an attractive option for countries with high population density and competing uses for available land.

Floating solar also complements existing hydropower infrastructure. At some large hydropower plants, only 3-4 percent of the reservoir would need to be covered with floating solar panels to double the electricity generation capacity of the dam. In addition, combining hydropower and solar power outputs can help smooth the variable nature of solar power. The technology can also help manage periods of low water availability by using solar capacity first and drawing on hydropower at night or during peak demand. In agricultural reservoirs, the solar panels can reduce evaporation, improve water quality, and serve as an energy source for pumping and irrigation.