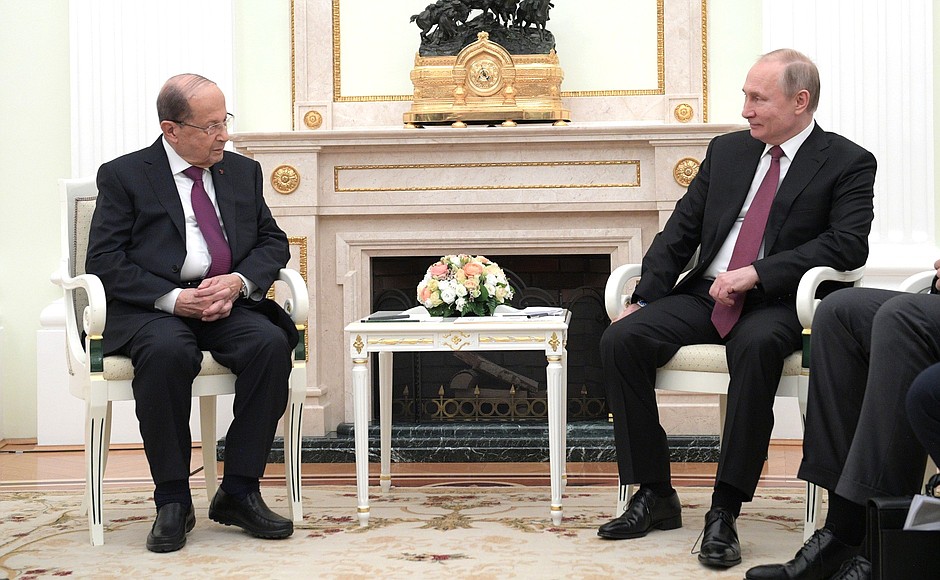 Vladimir Putin held talks at the Kremlin with President of the Lebanese Republic Michel Aoun, who is in Russia on an official visit.

Following the talks the two leaders adopted a Joint Statement on Further Developing and Strengthening the Relations of Friendship and Cooperation between Lebanon and Russia.

We are very happy to welcome you to Moscow.

Lebanon is our traditional longtime partner in the Middle East and North Africa. We maintain relations with the leaders of your country and representatives of different political forces and religions. We are happy to see you in Moscow both as the President of the country and a representative of the Christian community.

This year marks the 75th anniversary of diplomatic relations between our countries. This country, the Soviet Union at that time, was one of the first to recognize Lebanon’s independence.

Mr President, I would like to emphasise once again that we are happy to see you in our country. Welcome.

President of the Lebanese Republic Michel Aoun (:  President, thank you very much.

I would also like to note the long-term nature of our relations that are more than a hundred years old. Of course, there was an interval when they broke up, but we will work in the hope that they will only grow stronger at present and in the future.

We highly value the position of Russia, your stance in defence of religious minorities in the East. It goes without saying that we are living through hard times now and would therefore like to have your support.

We held a number of meetings with representatives from Russian business circles yesterday and today, and these meetings were very useful, We hope they will promote economic cooperation.

Regrettably, today we heard the news that the United States has the Golan Heights as part of Israel. Naturally, this undermines the foundations and principles of the UN and international law since the founding of this . This is the second time that we are seeing how one state simply takes away occupied territories in this region. This is certainly a source of serious concern for the countries that are in the direct vicinity of Israel. We hope a settlement to this problem will be found in the near future.”