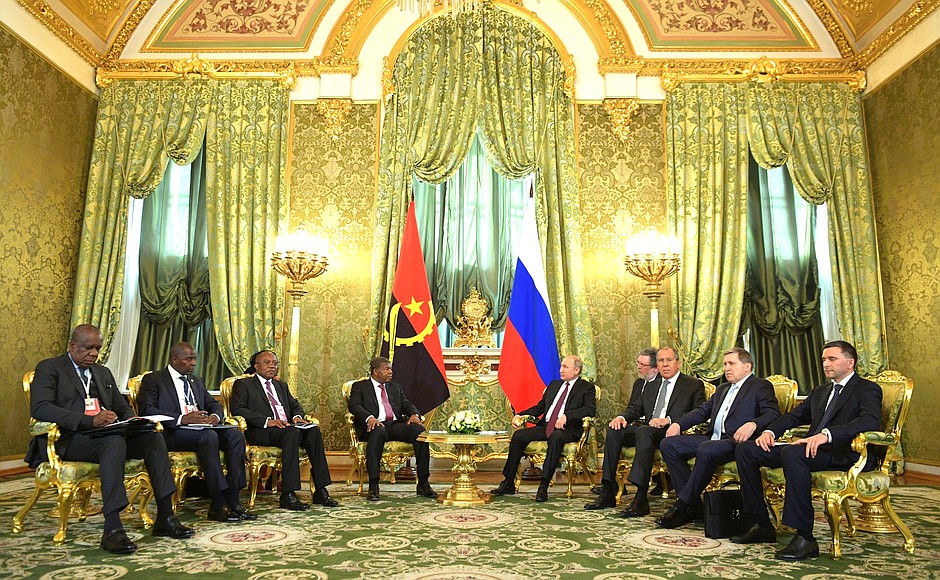 Vladimir Putin held talks yesterday at the Kremlin with President of Angola Joao Lourenco, who has come to Russia on an official visit.

The presidents discussed the strengthening of cooperation in trade, the economy and culture, as well as current international and regional matters.

Vladimir Putin and Joao Lourenco signed a joint communique after their international consultations. A number of bilateral documents were also signed during the official visit by the President of Angola to Russia. Specifically, intergovernmental agreements on the peaceful exploration and use of space and on fishery and aquaculture were signed, as well as documents on cooperation in diamond mining and processing.

In addition, Joao Lourenco presented Vladimir Putin with a high Angolan award – the Order of Agostinho Neto, the first President of Angola – as a sign of gratitude for the years of support for the Republic.

“President of Russia Vladimir Putin: President, friends, It is a pleasure to see you and to welcome you to Moscow.

We met in Johannesburg last year, and I am happy to welcome you to Moscow in your capacity as the head of state.

You are well acquainted with our country, because you studied here, and I hope you will find it both interesting and pleasant to see how Moscow and Russia have changed.

Angola is a reliable and old partner. We need to consider what we need to do without delay to stimulate our trade and economic ties.

There are interesting fields of activity, such as the diamond industry, fisheries and space exploration. There are also cultural spheres, such as education and the training of personnel.

We are happy to see you. Welcome to Moscow.

President of Angola Joao Lourenco : Thank you very much, President.

Thank you for receiving me and the accompanying delegation in Moscow. As you have said correctly, it is true that I have noticed how much Russia has improved over these years, since 1982, when I completed my education in Moscow.

Moscow then and now are two different cities. My congratulations – you have ensured progress and development for Russia and the Russian people.

We have come to Russia on an official visit to strengthen our ties and cooperation and, if possible, to promote interaction between our countries.

Russia is doing splendidly in the spheres of mineral resources, education, healthcare and defence. But we would like to know about Russia’s potential in other fields so we can promote cooperation in these areas of the Angolan economy.

This is why my speech at the opening of the Angola-Russia Forum in Moscow yesterday was designed to attract the interest of Russian business people to investing in the Angolan economy.

Many countries are doing this, and we are confident that Russia can help with economic diversification.

Vladimir Putin: Mr President, I think that this year we will have an opportunity to continue our dialogue aimed at finding ways to strengthen our economic ties. On October 24 of this year, a major Russia-Africa Forum will be held in Sochi. We hope to see you there.

Joao Lourenco: I will be happy to attend it.”