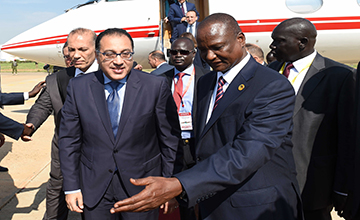 This morning Dr. Mustafa Madbouli, The prime minister and the Minister of Housing, Utilities and Urban Communities, arrived at Sudan’s capital, Juba to participate on behalf of President Abdel Fattah al-Sisi at the signing of the 2018 South Sudan peace agreement ceremony.
At the airport Dr. Madbouli was greeted by the Vice President of South Sudan, Taban Deng, where a formal reception was prepared to welcome the Egyptian prime minister in the presence of a number of ministers of the Government of Southern Sudan.
Dr. Madbouli was accompanied by the vice President of South Sudan to attend the official reception where Mr. Deng expressed his country’s appreciation towards Egypt in sending such a high-level delegation to participate in the celebration.