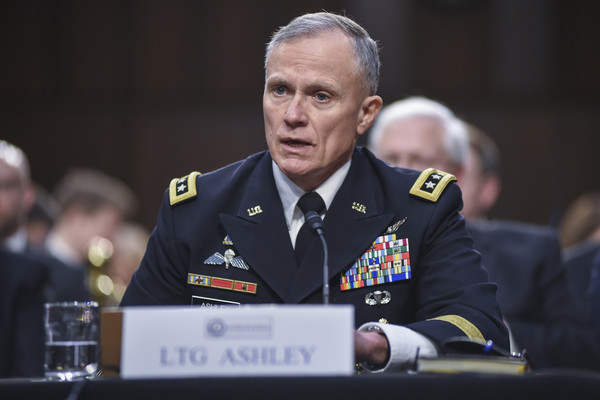 “I tell my workforce that our mission every day is to seek the truth, speak the truth,” Coats said.

He went on to describe a toxic mix of regional and state actors, failed states and non-state actors using a variety of tools to achieve their goals, specifically calling out Russia, Iran, North Korea, transnational terrorist groups and China, which generated the most attention among the committee members.

“In the last decade and a half, China has been advancing through theft of intellectual property and technology,” explained Coats.

Ashley emphasized Chinese theft and duplication of western technology is of great concern to the military. He noted the practice of white labeling products to hide the original manufacturer presents an opportunity for the Chinese to infiltrate the military supply chain.

“From a military perspective, we do due diligent research to discover who is behind a product, but as supply chains become more complicated, the process is increasingly difficult,” Ashley said.

Ashley also informed the senators of China’s efforts to develop and take full advantage of dual use technologies such as sensors and biogenetics. Ashley stressed these advanced technologies enable both positive and threatening capabilities.

Speaking to the Russian threat, Coats expressed the intelligence community’s assessment that foreign actors will view the 2020 elections as an opportunity to advance their priorities.

“Russia’s approach relies on misinformation and deception to undermine the post-World War II world order,” said Coats. “We assess Russia will continue to leverage social media to interfere with US elections.

In addition to questions on the myriad of threats, the committee inquired on how the community plans to recruit highly skilled employees to counter the threats. While acknowledging the government can’t compete with the private sector in terms of salary, the agency leaders stated a career in the intelligence community is uniquely valuable with an unrivaled sense of purpose

“Imagine that when you get up every morning, your task is to protect the hopes and dreams of 320 million Americans—we do that every day,” Ashley said.