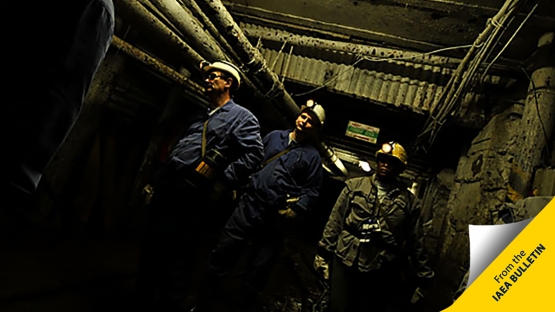 You explore uranium, you perform feasibility studies, you develop the project, you mine the uranium, you process and produce it, you transport it, you decommission the project and remediate the site. That’s it. Sounds all so simple.

But is it, really?

We want the newcomers to uranium production to understand that it is a staged process. That you only go forward if you find something promising. If it’s suitable and financially viable

How will a ‘newcomer’ country or one that wants to come back to uranium production know how to do it right? What steps will they need to take, long before committing themselves to anything, to ensure safe and sustainable production?

Before introducing or reintroducing uranium mining and processing, a wide range of issues needs to be considered. The IAEA has been providing guidance on all these stages through safety standards, publications, meetings, networks and other means. The time has come to consolidate all this guidance.

At the request of several Member States, the IAEA has launched work to apply its Milestones Approach to uranium production.

In 2007, responding to increasing interest from Member States in adding nuclear power to their energy mix, the IAEA published its Milestones in the Development of a National Infrastructure for Nuclear Power. Because the time from the initial consideration of the nuclear power option by a country to the operation of its first nuclear power plant is about 10 to 15 years, the Milestones Approach divided this period into three phases: consider, prepare, construct. In each phase, the country is to handle 19 clearly defined issues, ranging from the legal and regulatory framework to human resource development, from stakeholder involvement to radioactive waste management.

In 2012, this approach was adapted to research reactors, as several Member States that were interested in building them were looking for similar guidance. Again, in three phases — consider, prepare, construct — and highlighting 19 issues, the Specific Considerations and Milestones for a Research Reactor Project was aimed at helping national authorities prepare better for safe, secure, sustainable research reactor operations.

Now the work is under way to apply this approach to uranium production. However, getting into uranium mining as a newcomer country is quite different from getting into nuclear power or research reactors.

“Theoretically, you can import any of these reactors and have them constructed or operated anywhere in the world,” said Brett Moldovan, uranium production specialist at the IAEA. “But uranium is where you have it, where you find it. We want the newcomers to uranium production to understand that it is a staged process. That you only go forward if you find something promising. If it’s suitable and financially viable.” With those considerations in mind, a meeting in December 2016 kicked off the preparation of a guidance document, which is now close to being finalized.

The guidance is being developed to include four stages where Member States might find themselves, with associated milestones for preparedness:

The document will feature common threads and good practices and is aimed at assisting Member States to identify areas within a stage where they are less prepared and giving advice for a way forward towards a later stage.

“But these are not clear-cut stages,” Moldovan said. “A Member State may simultaneously be in more than one of them. And even with excellent work in uranium exploration, with good policies, legislation, regulation and well trained experts, a Member State may remain in the earliest stage, simply because uranium ore may not be there.”

The intent of this guidance document is to show the best way for Member States to find, mine and process uranium, and safely clean up the sites at the end of their lifetime, Moldovan added. “Our goal is to help them do it right.”

Sources:
IAEA
Photograph:
The Dolni Rozinka uranium mine in the Czech Republic, one of the about 20 countries producing uranium. (Photo: D. Calma/IAEA)