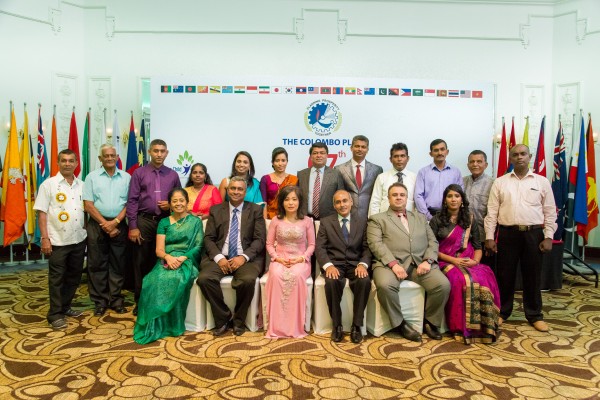 The 67th Anniversary of the Colombo Plan was celebrated at the Jubilee Hall of the Galle Face Hotel, Colombo on the 29th June 2018. The Speaker of the Parliament Honourable Karu Jayasuriya, graced the occasion as the Chief Guest. It was a-well attended reception with the participation of some Cabinet Ministers, Representatives of the Member States, members of the Diplomatic Missions as well as other distinguished guests.
The reception blended with unique events in Colombo Plan’s contribution to the environment. The Colombo Plan inaugurated a “One Child one Tree” concept, promotion of green clubs and campaign against plastics coinciding with the 67th Anniversary. An Inter-School Art Competition was also held for Colombo schools with the collaboration of the Zonal Education Department and Ananda College. Children from a number of schools in Colombo took part in the competition under three themes. “Me and my Environment”, “ I love my tree” and “say no to plastics” respectively. The competition was held under three categories – Bronze (Grades 6-8), Silver (Grades 9-11) and Gold (Grades 12-13). Each school was entitled to send a maximum of 6 participants, two from each category. The response from the schools were very encouraging and significant and the children took part in the competition very enthusiastically.
The winners of the Competition received their trophies and certificate on the day of the Anniversary Reception from the Hon. Speaker Mr Karu Jayasuriya with the participation of the Her Excellency Ambassador Phan Kieu Thu, Secretary General of the Colombo Plan and the President of the Colombo Plan Council His Excellency Mr. Mohamed Hussain Shareef, Ambassador of the Maldives.
On the same day of the reception, the Colombo Plan also launched the “gift a plant” campaign linked to the birthdays of children in elementary classes which is expected to inculcate a sense of responsibility, awareness and pride in planting and nurturing a tree as their own. As the child grows, the plant also will grow and mature in to a tree by the time the child completes his elementary education. Three children who were celebrating their birthdays on the same day as the Founding Day of the Colombo Plan also received a plant each on the day of the reception from Hon. Mr. Karu Jayasuriya to commemorate the launch of the “one child one tree” concept.
The Secretary General made a unique gesture by presenting the Honourable speaker with a plant, as Colombo Plan’s commitment to make the world greener.
Sources:
The Colombo plan
Photograph:
All staff of The Colombo Plan present at the 67th Anniversary Celebrations