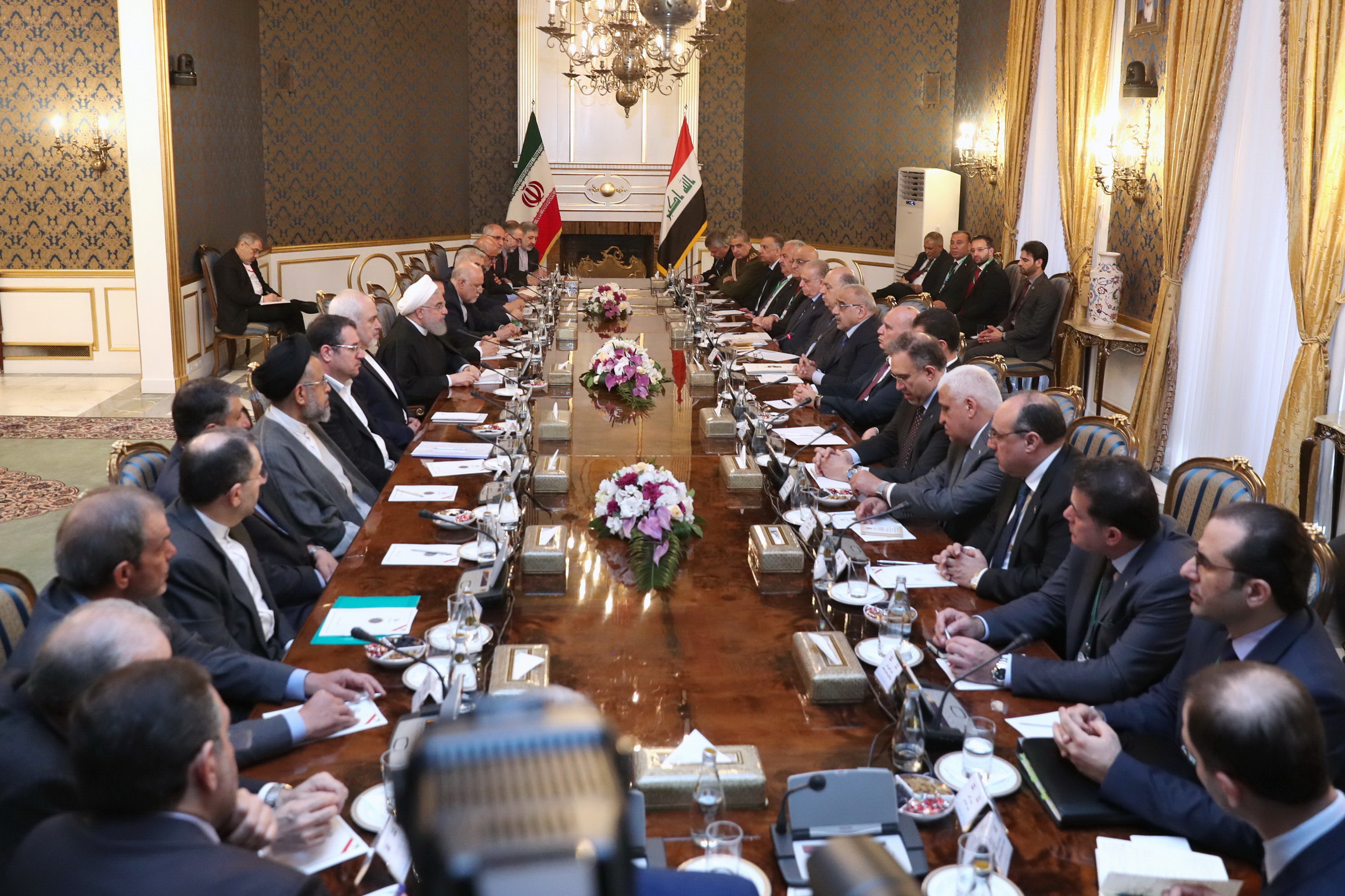 Speaking at the meeting of high-ranking delegations of Iran and Iraq on Saturday, Dr Hassan Rouhani expressed hope that Tehran-Baghdad ties further develop in different fields.

He also referred to the implementation of the agreement to issue free visas, adding, “This can be effective for development of relations and cooperation, especially in scientific, economic, and health fields”.

“Development of banking relations, and cooperation of central banks of Iran and Iraq are very important for deepening financial and economic cooperation between the two countries,” said Rouhani.

The President of the Islamic Republic of Iran also referred to the agreements for dredging Arvand Rud, saying, “We need to plan the activities so that the technical requirements are met by the end of Ramadan”.

On power and energy cooperation, as well as connection of railways of the two countries, he said, “We need to plan and work towards preferential tariffs and free trade between Iran and Iraq”.

The Islamic Republic of Iran supports development of trade relations and cooperation with Iraq, said Rouhani, adding, “Establishment of joint industrial parks and inviting investors to cooperate will be beneficial for trade relations”.

“We are ready to share our experience and implement technical and engineering services in the field of housing, power plans, dams and modern irrigation systems in Iraq,” said the President.

He also went on to say, “Relations between the seminaries of Iran and Iraq have always been very close and we should strive to establish closer relations between universities and professors”.

He added, “Fortunately, we have very good security at the borders of the two countries”.

“Development of relations between Iran and Iraq has always been beneficial for both nations and states, as well as peace, stability and security in the region,” said the President.

Stressing that security and integrity of Iraq is very important for Iran, he said, “Iran and Iraq’s will is to establish stability and security in the entire region”.

“The return of full security in Syria and development in this country are very important for Iran and Iraq, as two influential countries in the region”.

President Rouhani also stressed that Quds is the main, permanent capital of Palestine, saying, “Any move against this fact is contrary to the history and the United Nations’ regulations”.

The president added, “Without a doubt, Golan is part of Syria’s territory, which has been taken by the occupiers, and noting can deny this historical fact”.

Emphasising the necessity of ending the killing and war in Yemen, Dr Rouhani said, “Surely, the only solution to the Yemeni crisis is a political one and we hope we can work together to bring peace and security to this country and send humanitarian and food aid to the people “.

During the meeting, Prime Minister of Iraq Adil Abdul-Mahdi said, “The visit of the Iranian President to Iraq was a key and historic one, because it had many achievements”.

He added, “We must work towards the development of Iran-Iraq relations and cooperation in various fields of science, politics, economy and culture, to serve the mutual interests of the two nations”.

The Iraqi prime minister , “Under the Iraqi constitution, we will never allow Iraqi territory to be used against other countries, especially Iran, and we are serious about this issue”.