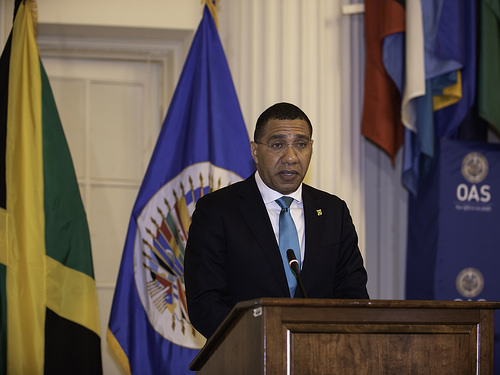 Prime Minister of Jamaica Highlights OAS Role in the Regionrong

The Prime Minister of Jamaica Andrew Holness today addressed the Permanent Council of the Organization of American States (OAS) and highlighted the crucial role the Organization has played in the last 70 years in promoting security, democracy, governance, peace and overall wellness in the region.

In his welcoming remarks, the Secretary General of the OAS, Luis Almagro, said that Prime Minister Holness “is a symbol of change, and he has shown his commitment to effect change, particularly in the area of governance.” “We are witnessing a revisiting of the ideal of government for the people and by the people, which promises to lay firm foundations for more sustainable, lasting and meaningful development in small nations,” added the Secretary General.

In his remarks, Prime Minister Holness said that after 70 years, the OAS “remains as relevant today as it was at the outset; given its role as the premier hemispheric institution it is needed now more than ever.” He added that “the challenges over next 70 years will be to continue beyond the realization of more rights for more people, as the OAS current tagline suggests” and to review “the successes and failures of the Organization to determine not only its focus, but also the adequacy of its current structures.”

Prime Minister Holness also valued the role of the OAS in the Summit of the Americas process in “the promotion of meaningful dialogue and important issues affecting the region” and commented on other issues of the concern to the region, including the fight against corruption, the impact of climate change, arms trafficking, transparency, and the diversification of energy sources.