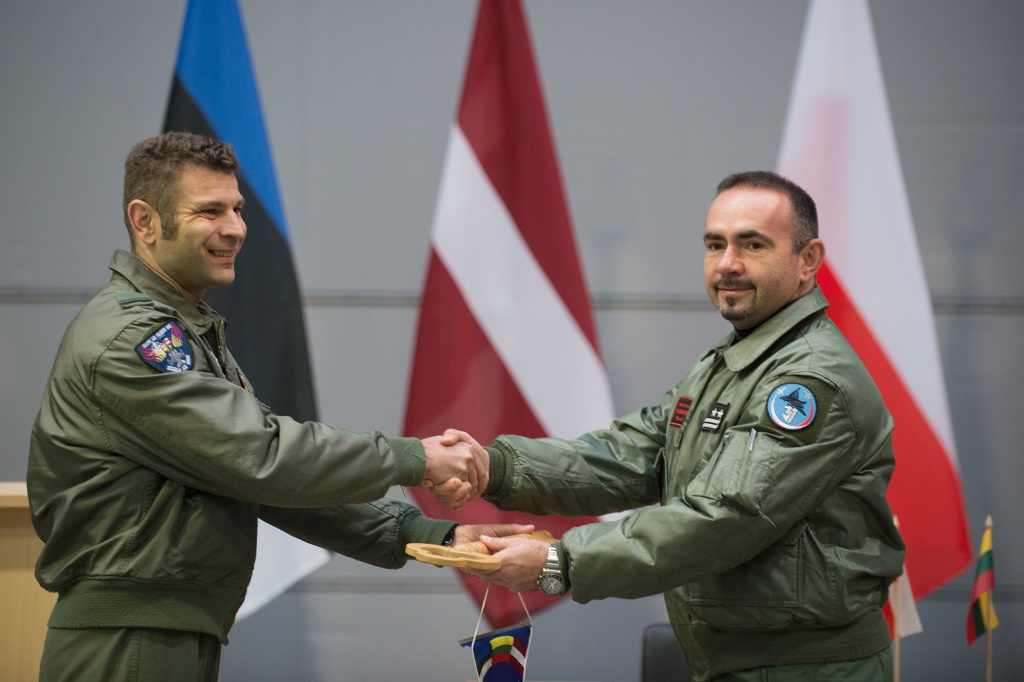 The Polish Air Force took over the responsibility for leading NATO’s Baltic Air Policing mission out of Šiauliai Air Base, Lithuania, from the Belgian Air Force on 3 January 2019. A traditional handover/takeover ceremony has been conducted at the Lithuanian Air Base every four months since 2004. The Polish Air Force was the eighth Ally to assume the mission at the end of 2005 and has now returned to accomplish the task for the first four months in 2019.
General Tod D. Wolters, Commander Allied Air Command welcomed the Polish Air Force detachment and four F-16 fighter aircraft. He also commended the Belgian detachment for keeping the Baltic Airspace safe conducting more than 20 alert scrambles during their four months of duty. General Wolters thanked Lithuania for having seamlessly provided Host Nation Support to the NATO Air Policing Mission in the Baltic States for 15 years already. “For almost 70 years our great NATO Alliance has provided collective security in the transatlantic area,” he stressed in his remarks. “During these decades Air Power has been and will continue to be the key capability package for NATO to provide collective defence, deterrence and security to all its Allies.”
“The NATO Air Policing Mission is proof of Allied solidarity,” said the Lithuanian Minister of Defence Raimundas Karoblis. “It shows all Allies stand together and that we are always vigilant in order to preserve stability and demonstrate resolve and deterrence,” he added.
The ceremony was attended by international civilian and military representatives among them Brigadier General Slawomir Zakowski, Deputy Commander of the Combined Air Operations Centre at Uedem, which controls the mission. Over the next four months, the Polish detachment will be augmented by the German Air Force detachment at Ämari Air Base, Estonia. Germany continues its deployment under NATO’s Baltic Air Policing as its Eurofighters which arrived in September 2018 will support the mission to the end of April.
In March and a Portuguese Air Force F-16 detachment will deploy to Malbork Air Base, Poland, under NATO’s assurance measures. This third asset provides additional resilience to the mission. Allied Air Command, through its Combined Air Operations Centre at Uedem, can exploit this enhanced Air Policing capability flexibly to safeguard NATO airspace in the region and to conduct training activities with Host Nation, Allied and Partner assets.