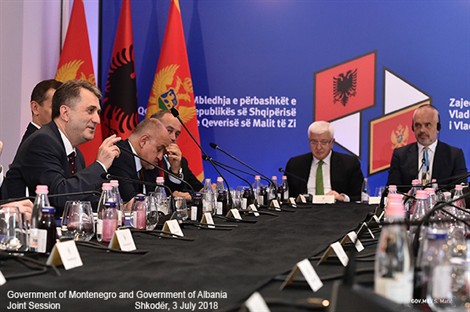 Interior Minister Mevludin Nuhodžić said in response to a reiterated statement by Prime Minister of Albania Edi Rama on the “Schengen borders between Montenegro, Albania, North Macedonia and Kosovo”, that Montenegro and the Republic of Albania have excellent friendly and good neighborly relations, that they have opened a common border crossing almost a decade before other countries of the region, and that it will be possible to speak of the Schengen border model in our region when the Western Balkan countries adopt standards and have relations that the Schengen countries have.
“Montenegro and the Republic of Albania have excellent friendly and good neighborly relations. Ten years ago (2009) we opened a joint road border crossing Sukobin – Murićani, with the possibility of joint control. Some other countries in the region have done it for almost a decade after us. But we did not stop. In the second half of last year, after the joint session of the two governments, we signed the Agreement on the opening of the joint border crossing Ckla – Zogaj” – said Minister Nuhodžić in response to yesterday’s statement of the Prime Minister of Albania given at a joint press conference with the Prime Minister of North Macedonia Zoran Zaev.
When it comes to and simpler crossing of the border, interior minister Nuhodžić added that in our focus is primarily the security of the state and citizens.
We are aware that there are increasingly intense threats such as crime, smuggling, illegal migration terrorism. Therefore, we pay special attention to strengthening the capacity for safer borders. The purpose of the Schengen agreement at the European Union level was precisely, not only to abolish internal border but also to create better conditions for monitoring external borders and combating cross-border crime. In this regard, Montenegro, with the support of the European Commission, successfully implements measures towards reaching the Schengen standards. In the framework of the implementation of the Schengen Action Plan, we are committed to the infrastructure at the border crossings, better technical equipment and training of the Border Police ” Minister Nuhodžić said.
“Our goal is to make the border as as possible for the faster flow of people and goods, and as as possible for criminals. And when we adopt the Schengen standards and have Schengen relations at the level of the countries of the Region, then we can talk about the Schengen border“ Interior Minister Mevludin Nuhodžić concluded.