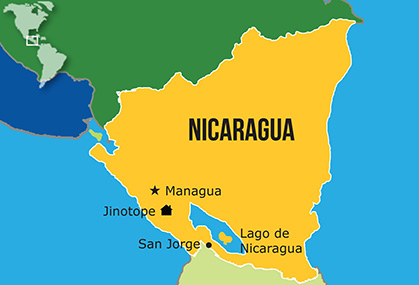 1.The European Union (EU) recalls the various EU declarations on Nicaragua and HRVP statements since April 2018 when demonstrations were brutally repressed by security forces and pro-government armed groups leading to clashes, several dead and injured and the arrest of hundreds of citizens, with widespread irregularities and arbitrariness in detention and judicial procedures.

3. The EU firmly condemns the repression of the press and civil society and the use of anti-terrorist laws to repress dissenting opinions in Nicaragua. The cancellation of legal registration of several civil society organisations and the illegal raids against independent media outlets, together with earlier measures that criminalise protest, create an environment where fundamental and constitutionally rights such as freedom of expression and assembly, freedom of movement, Habeas Corpus, and the right to a fair trial are not being ensured.

4. Just as the EU supported regional efforts to ensure accountability for all the crimes committed since April 2018, whoever the perpetrators, the EU deplores the suspension of the Special Monitoring Mechanism () and the termination of the mandate of the Interdisciplinary Group of Independent Experts (GEIE) of the Inter-American Commission on Human Rights (IACHR). The EU calls on the government of Nicaragua to cooperate constructively with the IACHR, its bodies and the OAS working group, guarantee conditions for their proper operations, and to allow the return of the Office of the United Nations Commissioner for Human Rights (OHCHR). There cannot be reconciliation without a transparent, inclusive and constructive national dialogue among all the parties involved and justice for all victims.

5. The EU believes that dialogue and negotiation including the adoption of electoral reforms to ensure credible elections responding to international democratic standards is the only way to address the current crisis and to respond to the pressing needs and aspirations of the people of Nicaragua. The EU regrets that electoral reforms promoted by the OAS have been . Therefore it urges the Nicaraguan government to re-engage in a process of meaningful and dialogue and stands ready to support a mediation acceptable to all stakeholders and electoral reforms.

6. The EU also calls on the authorities to cease the repression of public demonstration, independent media and journalists and civil society ; guarantee the physical security of their members and reinstate their legal status; release all those that were unlawfully imprisoned and ensure due process and fair treatment at all stages.

7. The EU will continue to monitor the situation closely and underlines its readiness to use all its policy instruments to contribute to a peaceful negotiated way out of the current crisis and react to further deterioration of human rights and rule of law.