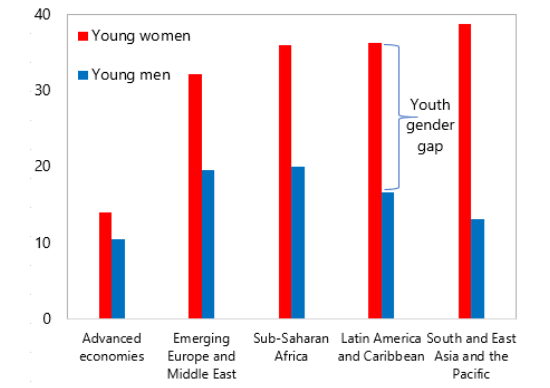 This chart shows large and persistent gaps between the number of young women and men. On average, nearly 30 percent of young women in these economies are not working or learning. This is almost twice the rate for young men in a similar position.

Among emerging market and developing economy regional groups, the gaps are largest in Latin America and South and East Asia on average. Some—but not all—of the discrepancy can be explained by the economic and social consequences of having children.

But laws have a role to play as well. The reality is that when women are legally protected from employment discrimination, their rates of employment and participation improve without hurting men’s chances. For example, if sub-Saharan Africa strengthened its legal protections for women to the average in emerging Europe and Central Asia, the study estimates that young women’s employment and participation rates could be 10–15 percentage points higher, thus sharply narrowing the gender gap.