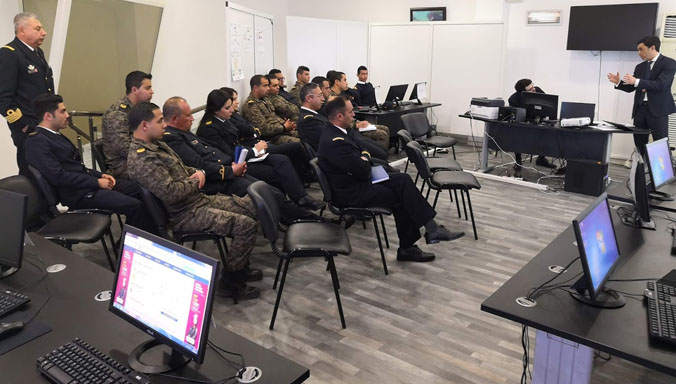 Tunisian Navy officers improved their readiness at sea and knowledge on maritime modeling and simulation during a two-week training course held in March 2019 at the naval base La Goulette, Tunisia. The training is sponsored by the NATO Science for Peace and Security (SPS) Programme to help Tunisia modernise its defence and upgrade its maritime simulator to NATO standards and architectures.

“This course was important, as it ensured a fast learning and a qualified preparation for the navy personnel and it will directly improve our readiness and effectiveness,” said Captain Lofti Melliti, Co-director of the course and Head of the IT department of the Tunisian Navy.

The maritime simulator mimics various operations, from hybrid to conventional scenarios. ‘The core of the simulation capability is a constructive simulator which manages various assets such as vessels, but also aircrafts, general maritime traffic, potential threats and enemy vessels,’explained Dr Alberto Tremori, modelling and simulation scientist at NATO’s Centre for Maritime Research and Experimentation (CMRE), in La Spezia, Italy. Events and incidents can be added and the trainee has to make various decisions from tactical manoeuvers to detection and identification of possible threats with radars, and finally engage with the enemy.