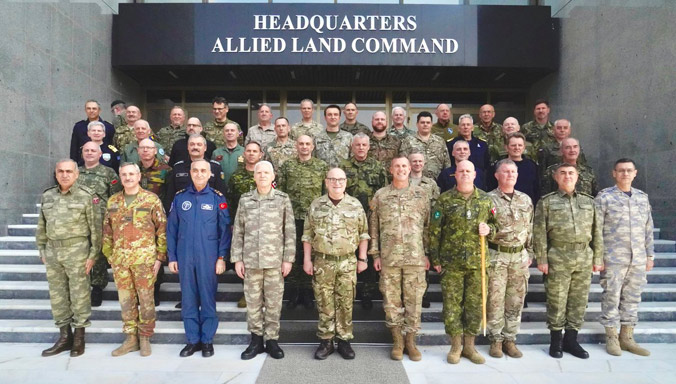 Opening the two-day meeting, the Chairman of the NATO Military Committee, Air Chief Marshal Sir Stuart Peach congratulated Turkey on its recent Anniversary: “On 18 February, Turkey celebrated its 67th Anniversary as a NATO Ally. You have demonstrated an unwavering commitment to the Alliance since joining in 1951”. The Chairman also commended Turkey for its ongoing and enduring commitment of the Turkish armed forces to NATO missions and operations around the world. Co-chairing the opening session, General Abdullah Recep the Turkish Aegean Army Commander welcomed the Military Committee visit as a show of support.

Hosted at the Headquarters of Allied Land Command (LANDCOM), the NATO Military Representatives were briefed by Major General Mustafa Oğuz, head of the directorate for Plans and Principles of the Turkish General Staff, about the country’s contributions to NATO. They then received an update from the LANDCOM Commander Lieutenant General John C. Thomson on the responsibilities of the Land Component. The meeting ended with a review of the ongoing implementation of the NATO Command Structure and a discussion on the Theatre Land Component Command Element.

LANDCOM is the standing headquarters for NATO land forces and when directed by the Supreme Allied Commander Europe (SACEUR), it provides the core of the headquarters responsible for the conduct of land operations.