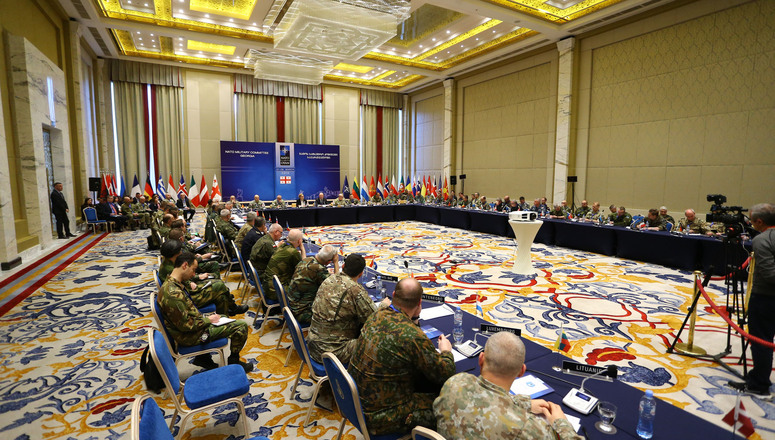 While in Georgia, the NATO Military Committee held a meeting in the NATO-Georgia format led by the Chairman of the NATO Military Committee, Air Chief Marshal Peach and the Georgian Minister of Defence, Mr Levan Izoria. During his opening remarks, Air Chief Marshal Peach reiterated NATO’s support to Georgia and urged Russia to release its hold on the Georgian territories of Abkhazia and South Ossetia. The chairman added that “Russia must withdraw its troops from Georgia’s occupied regions and must learn to respect Georgia’s sovereignty, territory and internationally recognised borders”.

During the meeting, the NATO Military Committee received an overview of the regional security situation, including the occupied regions of Abkhazia and South Ossetia, and the Black Sea. The NATO Military Representatives were then briefed on the ongoing implementation of the Substantial NATO-Georgia Package, the ongoing Georgian Reforms as well as the ongoing Georgian contributions to NATO operations and exercises. “For over two decades, Georgia and NATO have mutually benefitted from this enduring partnership. NATO has demonstrated its continued support to Georgia through numerous programmes and initiatives, such as the Joint Training and Evaluation Centre. And in return, Georgia has continuously supported NATO. Today, Georgia is the largest non-NATO contributor to our Resolute Support Mission. This demonstrates a linked-minded approach to peace and security”. The Chairman also commended the Georgian Defence Forces for their renowned professionalism and dedication.

On the 28th of March, the NATO Military Committee headed to the Vaziani Military Base to receive a briefing from the Combat Training Centre and visit the Georgia Defence Readiness Programme, a bilateral programme designed, by the US, to improve Georgian troops’ combat readiness and develop a self-sustaining institutional capacity to man, train and equip their national missions.

The NATO Military Committee then proceeded to the Joint Training and Evaluation Centre to observe the “NATO-Georgia Exercise 2019”. This joint multinational brigade-level, Command Post exercise brought together 350 personnel from 24 NATO and Partner Nations. This drill aims to further develop the interoperability of Georgian, Allied and Partner Forces, as well as Georgian command and control capabilities. “Our Georgian colleagues are leading this multinational crisis response exercise. Thanks to exercises like this one and military cooperation Georgian forces are more interoperable than ever before with NATO troops. This underlines the mutual commitment to strong defence, interoperability and shared approach to international security”, highlighted Air Chief Marshal Peach.