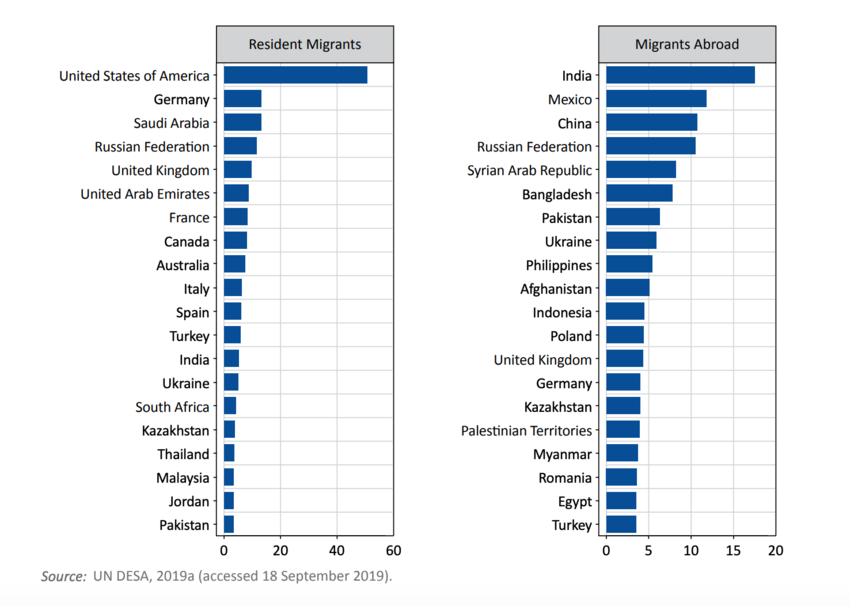 1. Where do international migrants come from and where do they live?

Historically, the United States has been the major destination country for international migrants. This trend continued in 2019, with an estimated 51 million international migrants living in the country, the largest population of them in the world. Despite the highly politicized negative rhetoric on migrants, the US has been the most significant destination country for decades, with many migrants positively and disproportionately contributing to aspects of American life.

India, Mexico and China topped the list of countries with the largest number of migrants living abroad in 2019. More than 40% of international migrants worldwide were born in Asia, with India alone the origin of 17.5 million.

2. What do the main migration corridors show?

But the second-largest corridor in the world, Syria to Turkey, has developed only recently. The conflict in Syria has resulted in mass displacement, forcing millions of Syrians to leave their country. An estimated 3.7 million Syrians were residing in Turkey in 2019.

Meanwhile, other large corridors, such as the one between India and Pakistan, are partly due to historical events such as the mass displacement during the 1947 partition.

3.Which countries host the largest number of refugees?

Developing countries continue to host the majority of refugees globally. Of an estimated 25.9 million refugees globally in 2018, developing regions hosted the vast number (84%). Turkey and Germany were the only two countries out of the top five refugee hosts that were not developing countries, with the former hosting the largest number of refugees in the world (3.7 million), many of whom are Syrians. Turkey was followed by Pakistan, which was home to around 1.4 million refugees (mostly Afghans), while Uganda hosted the third-largest number (1.1 million).