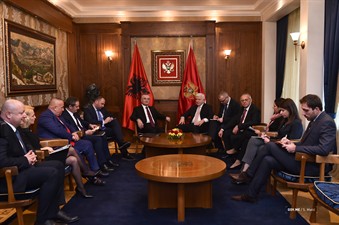 Montenegro and Albania should join forces to make the best of common potentials in many areas such as water management, tourism and agriculture, Prime Minister of Montenegro Duško Marković and President of Albania Ilir Meta agreed at 21 January 2019 meeting in Podgorica.
“The economic prospects of the two countries are serious and the two governments should do everything to use them,” said Prime Minister Marković, adding that bilateral political relations are at a very high level.
The Prime Minister noted the remarkable economic growth achieved during the Government’s mandate and said that it is committed to improving the quality of life of citizens.
He pointed out the special development potentials of the north of the country, adding that the Government is committed to implementing infrastructure projects, including the road from Podgorica via Dinoša to Cijevna Zatrijebačka, worth EUR 11 million, which is of special importance for the residents of Plav and Gusinje.
Both sides the importance of promoting rights and contribution of minority communities that strengthen and enhance the partnership and friendship between Montenegro and Albania.
The meeting also discussed the importance of peace and stability in the region, and in that context, the importance of the membership of both countries in NATO, the significance of European integration as well. Prime Minister Marković said that Montenegro supports Albania’s EU bid, adding that country is willing to transfer knowledge and experience from its negotiation process.

Sources:
Office of the Prime Minister of Montenegro