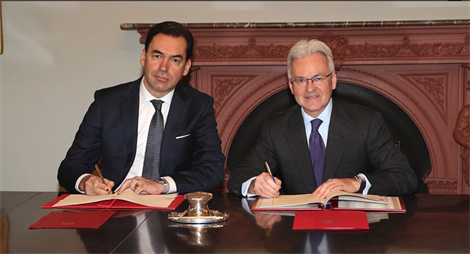 Deputy Prime Minister and Minister of Justice Zoran Pažin met yesterday in London with British Minister of State for Europe and the Americas Alan Duncan.

The Deputy Prime Minister and Minister Duncan signed a bilateral agreement, complementing the European Convention on Extradition and facilitating its application.

The main novelty of this agreement is that Montenegro and the United Kingdom express their readiness to extradite their own citizens to one another if one country seeks them for serious crimes for which a prison sentence of five or more years has been foreseen.

“This agreement unambiguously indicates that there is a high degree of mutual respect and trust between Montenegro and the United Kingdom, with the conviction that the legal systems of both states will guarantee the right to a fair trial of every person who is extradited, respecting the presumption of innocence,” DPM Pažin emphasised.

The agreement states that the parties are “aware of the guarantee of the right to a fair trial of the accused within their legal systems, including the right to trial before an impartial tribunal established by law”.

DPM Pažin signed a Memorandum of Understanding with Minister Duncan and Financial Secretary to the Treasury Mel Stride in order to further deepen cooperation in the area of security, the rule of law and the joint fight against organised crime, especially against various types of financial crime.