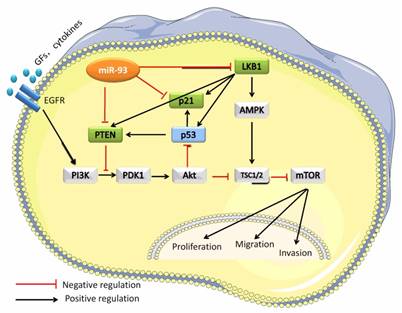 MiR-93 Promotes the Growth and Invasion of Prostate Cancer by Upregulating its Target Genes TGFBR2, ITGB8, and LATS2

This study aimed to evaluate the effects of miR-93 on the growth and invasiveness of prostate cancer (PC) cells (PCCs). Real-time polymerase chain reaction was carried out to detect the expression of miR-93 in the PC tissues and cell lines. The adjacent normal tissues served as controls. For in vitroexperiments, methyl thiazolyl tetrazolium, clone formation, tumor cell invasion assays and western blot analysis (WBA) were performed to confirm the variations in the proliferation and invasiveness of PCCs, prior and subsequent to transfection with a miR-93 antisense oligonucleotide (ASO), which blocks miR-93 binding to its target. Furthermore, the effect of miR-93 on the proliferation of PCCs was examined. Finally, the expression levels of the target genes of miR-93 were determined by WBA. MiR-93 expression was higher in PC tissues than in the adjacent normal tissues, and a reduction in the miR-93 level remarkably inhibited the proliferation and invasiveness of PCCs. Moreover, miR-93 enhanced the expression of its target genes TGFBR2, ITGB8, and LATS2. The results of this study suggest that miR-93 may promote the proliferation and invasion of PCCs by upregulating its target genes TGFBR2, ITGB8, and LATS2.