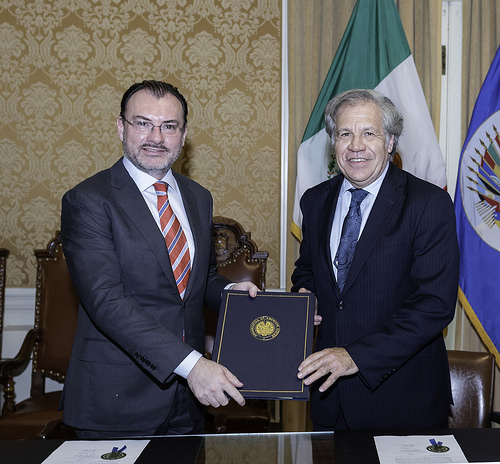 Mexico today signed the Inter-American Convention against all forms of Discrimination and Intolerance, which was adopted by the General Assembly of the Organization of American States (OAS) in June 2013.

The Secretary General of the OAS, Luis Almagro, stressed that the Convention seeks to create the best conditions for all members of society to preserve and develop their identity, and congratulated Mexico for joining the initiative. “Because of its history, size and cultural richness, Mexico is a key country in the Inter-American system. That is why we celebrate even more its signing of the Convention, because we trust that many countries will follow its example and join this initiative whose objective is to achieve more rights for more people,” said Secretary General Almagro.

For his part, the Foreign Minister of Mexico, Luis Videgaray, said that the spirit of tolerance of the convention reflects the foreign policy of his country. “This is an effective instrument, which not only establishes good wishes, but goes beyond even other conventions on the subject, and also establishes affirmative prescriptions, precisely to make the fight against discrimination, intolerance and hatred a public policy of the State. With just a few days remaining before the end of the government of President Enrique Peña Nieto, we confirm that these are the values of Mexico,” added Videgaray.

The Convention has been signed by eleven states: Argentina, Bolivia, Brazil, Chile, Colombia, Ecuador, Haiti, Panama, Peru, Uruguay and now Mexico. So far, it has only been ratified by Uruguay. Today´s signing took place at OAS headquarters in Washington, DC.