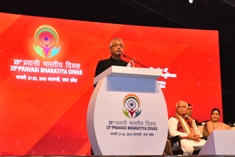 “Our presence in the Pravasi Bharatiya Divas (PBD) reflects of with India and reaffirms resilience of cultural heritage and ancestral values across time and space and shows a common sense of belonging”. This was the gist of the message of the Prime Minister, Minister of Home Affairs, External Communications and National Development Unit and Minister of Finance and Economic Development, Mr. Pravind Kumar Jugnauth, who was speaking at the inauguration of the 15th Pravasi Bharatiya Divas (PBD) held in Varanasi, Uttar Pradesh. Mr. Jugnauth is the Chief Guest at the PBD which was held from 21 to 23 January 2019.

The Prime Minister highlighted that the PBD, which is the most prestigious gathering of the Indian diaspora, will pave the way to develop bilateral and multilateral actions and further consolidate diplomatic . He expressed enthusiasm as regards the opportunities that the PBD will offer in terms of discussions and ways people can cooperate using the powerful tool of shared history, affinities, cultures and religious identities

Referring to the theme of the 15th PBD which is “The Role of Indian Diaspora in Building New India”, Jugnauth underpinned the importance of diaspora networks in bringing new perspectives and development opportunities to work with each other. This mutually beneficial partnership, he stated, will bring specific groups of professionals under the PBD for exchanges of common issues. He also lauded the establishment of a Diaspora Connect Exchange Network that exchanges and collaboration of common projects

Speaking about Mauritius, Prime Minister Jugnauth added that education plays a critical role in ensuring that all faiths and cultures are respected and upheld. He recalled that since January this year, tertiary education is free. Students who work hard and are capable should not be denied the opportunity of learning, he said, adding that his ambition is to further enhance the quality of tertiary education and make it more responsive to the market while instilling in emerging generations an increased sense of responsibility in nation building and sustainable development

He further expressed determination to see the transformation of Mauritius into a modern state based on sustainable and inclusive development where traditional and innovative coexist smoothly. Mauritius, he pointed out, has chartered its course to become a economy with modern infrastructure. It is important to ensure that people have quality of life, decent jobs, secure and peaceful environment, access to good education, healthcare employment, he said

While lauding the impressive economic development of India, Prime Minister Jugnauth underlined the significant support of India to Mauritius in its efforts to gravitate to a higher path of development. He mentioned the avenues of cooperation in view of reinforcing the existing bilateral and friendly ties between the two countries. They Metro Express project, construction of Supreme Court and a modern Ear, Nose and Throat Hospital, and the construction of a modern infrastructure in Agalega

He also highlighted that Mauritius is leaving no stone unturned to promote Hindi as a global language and to preserve its critical role in the preservation and transmission of cultures. In this vein, he added that the World Hindi Secretariat (WHS), which aims at promoting language internationally and campaigning for its recognition as an official United Nations language, was inaugurated in Mauritius in March 2018 by the President of the Republic of India, Ram Nath Kovind. The 11th WHS Conference was also held in Mauritius in August last year, which is a testimony to the value we attach to languages in Mauritius, he added.

Office of the Prime Minister of Mauritius