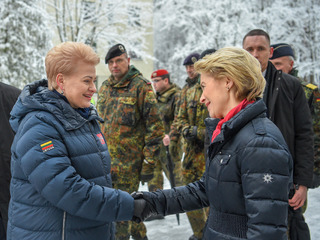 After a bilateral meeting where military collaboration between Lithuania and Germany as well as further steps to ensure effective regional security were discussed, the President and both Lithuanian and German Defense Ministers attended the change of command ceremony for NATO’s enhanced forward presence battle group.

The German-led NATO combat group marks its second anniversary in Lithuania. According to the President, over a relatively short period of time after political decisions were made, the battalion has become an integral part of Lithuanian defense.

The President highlighted that today’s NATO is a completely different defense Alliance, compared to the one Lithuania joined 15 years ago. Over a period of 15 years, NATO has turned into organization which successfully implements the Wales and Warsaw decisions, has well-prepared regional defense plans and is capable of responding the changing threats, deterring, defending, and ensuring its territorial integrity.

President Dalia Grybauskaitė believes that Germany has contributed a lot to NATO’s transformation. Having assumed the responsibility for leading a multinational battalion with troops from ten allied nations in Lithuania, Germany demonstrates outstanding leadership. Its role is becoming indispensable to European security.

The President extended gratitude to Germany, Defense Minister Ursula von der Leyen and every NATO soldier who contributes to ensuring the security of Lithuania, the region and the entire Alliance. The President emphasized that Lithuania and Germany enjoy the most successful cooperation in history in almost all areas and intense bilateral military relations have already become an important part of the European security architecture.

Office of the President of Lithuania