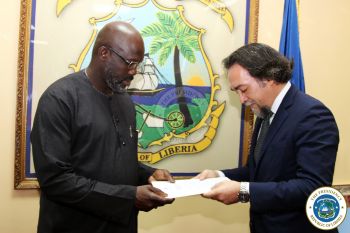 A day after President George Manneh Weah received letters of credence from six ambassadors from three continents, another batch of six ambassadors similarly followed with exchange of friendly pleasantries.

The six ambassadors who on Friday, January 25, presented their letters of credence to President Weah bring the number of diplomats announcing their arrival and assignment in the country within a week to twelve. The latest ambassadors who have promised to strengthen and expand diplomatic ties with Liberia come from Australia, Thailand, Guinea Bissau, Italy, Botswana Vietnam.

Elated while receiving the diplomats at intervals, President Weah expressed heartfelt gratitude to their governments and peoples for seeing the need to consolidate their relationships with Liberia.

The President said he was convinced the presence of these countries in Liberia would yield substantial mutual benefits for Liberia and their respective countries.

Welcoming the Ambassador of Australia, Andrew Barnes, the first to present of credence on Friday, the President said he was glad to have him in the country and that he looked forward to building a more cordial and beneficial relationship with Australia.

“I hope your coming will help strengthen our relationship,” President Weah emphasized. “Liberia and Australia’s ties have come a long way and it is my hope we will work together for the benefit of our both nations.”

For his part, the Australian Diplomat said it was an honor representing his country in Liberia which he said has enormous potential to flourish economically. “Our relationship with Liberia has been strong and excellent,” he noted.

Amb. Barnes disclosed plans by Australian firms to invest in the country, particularly in the area of mining.

Also presenting his letter of credence, Ambassador Aroon Jivasakapimas of Thailand recounted fond memories of Liberia as a country of good hospitality.

He emphasized that his country’s ties with Liberia will boost bilateral cooperation.

In the same vein, Guinea Bissau Envoy, Ernesto Muntaga Jalo praised the diplomatic ties between Liberia and Guinea Bissau and noted that President Weah was truly an inspiration to the African Continent who did not need . He said the Liberian leader made enormous contributions to the Continent that cannot be ignored. The Ambassador said President Weah’s Leadership will help move Liberia forward.

For his part, Diplomat Stefano Lo Savio of Italy said Liberia and Italy relations have come and in the best interest of peoples of both countries.

He disclosed that the Italian government was interested in investing in Liberia’s oil and gas sector.

For Ambassador Pule Batimanki Mphothwe of Botswana, he said Liberia and Botswana share things in common and expressed hope that the ties between the two countries would garner enormous strength.

Also presenting his Letter of Credence, Ambassador Pham Anh Tuan of Vietnam said Liberia and his country would benefit from diplomatic relations.

The presentation of letters of credence took place at the Liberian Leader’s Ministry of Foreign Affairs Office.

Office of the President of Liberia