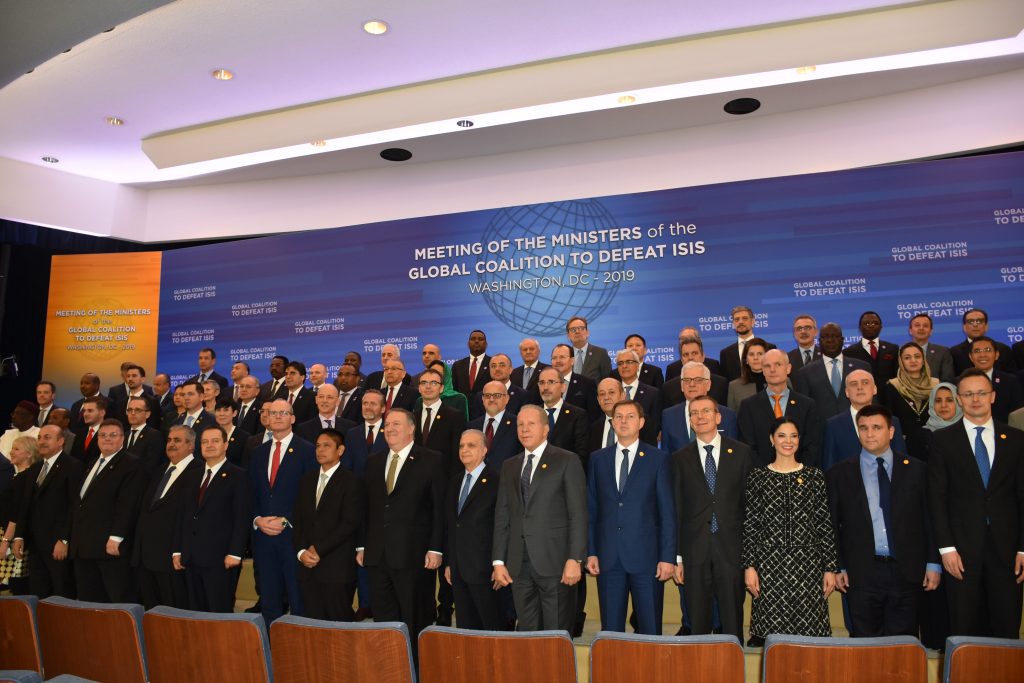 On Wednesday they were officially welcomed into the 79-member Global Coalition Against ISIS at a conference of Foreign Ministers in Washington, DC hosted by US Secretary of State Mike Pompeo and attended by President Donald Trump. “I welcome our newest members, Kenya and Fiji to this family of nations committed to defeating ISIS and it’s affiliates. Let us do this together”, said Pompeo in his opening remarks at the conference he hosted at the US Department of State in the US capital. The Kenyan delegation is led by Foreign Affairs CAS Hon Ababu Namwamba, EGH representing CS Monica Juma.

The meeting of Foreign Ministers of the Coalition reviewed the progress of the past year and discussed the next stage in the campaign to ensure the enduring defeat of ISIS. The Global Coalition is committed to tackling ISIS on all fronts, to dismantle its networks, counter its global ambitions, degrade and ultimately defeat ISIS and its affiliates.

In his address to the high level conference, CAS Ababu used the opportunity to strongly discourage what he termed “the predictable pattern of travel advisories” in the aftermath of terror attacks. “Travel advisories only serve to play into the hands of these vile merchants of death to who fear and despondence are essential tools of trade. The advisories also compromise the standing of countries already reeling under effects of terror attacks. They are knee jerk, reactionary  and counterproductive. Let us commit to review this policy,” Hon Ababu urged.

CAS Ababu also pitched strongly for the Al Shabaab terror group to be officially classified as a terrorist group by the UN Security Council and the US, who currently categorise the group only as a militia. “Inconsistent with the current classification by the United Nations Security Council, Al Shabaab is no longer a militia but an organization that has metamorphosed into a hydra-headed monster. Its reach through Africa, in Somalia, eastern Congo, and northern Mozambique demonstrates the catastrophic dimension of its ambition and speaks to its potency as a raging terrorist group and makes it absolutely urgent that it be listed as such by the UNSC to halt its subtly distressing rise”, Ababu told the Washington conference.

He assured the global audience of Kenya’s commitment to the global  war on terror. “Kenya stands ready to continue cooperating with the USA and other countries of similar mind, especially those in this coalition. Because the terrorist networks in Africa, Middle East, Asia and Europe or elsewhere are connected and draw from a borderless theatre, it is critical that we evolve a holistic approach dealing with all terrorist theatre – otherwise we run the risk of displacing terrorists from one theatre to another”, Hon Ababu said.

Kenya joined the 79 member coalition last year and hopes to rally global support against the threat of Al-Shabaab and mutants of other terror groups in the Horn of Africa and Great Lakes region which are linked to the global jihadist movement.

The meeting comes against the backdrop of the January 15 Riverside terrorist attack in Nairobi by the Al Shabaab, which CAS Ababu discussed in his address. “Kenya has been in the eye of the storm of the global jihad…We do appreciate the international cooperation and support in our fight against terror. But it must be noted that while the Riverside attack was done on Kenyan territory, it was nonetheless targeted at the world. Riverside 14 is a converging point for the world. It hosts international clientele, has several international establishments and on the material day was host to several international conferences. In its justification of this heinous crime, the Al Shabaab claimed that the attack was an avenging the USA relocation of its embassy from Tel Aviv to Jerusalem,” the CAS said.

Ababu added further “the appetite to attack Kenya is driven by what we have come to symbolize: a thriving democracy: embodying freedoms of movement association, worship, respect for diversity; a thriving economy; and a functioning society.  In other words, we are an embodiment of the values that we, in this room, share and protect.  For these same reasons, Kenya remains firmly on the side of vanguard states that are committed to the fight against terrorism. We have responded to this threat by improving our capabilities to detect, prevent and manage attacks”.

Beyond the military campaign in Iraq and Syria, the coalition seeks to tackle ISIS’s financing and economic infrastructure, prevent the flow of foreign terrorist fighters across borders, support stabilization and the restoration of essential public services to areas liberated from ISIS and countering the Group’s propaganda.

Addressing the Washington Conference, President Donald Trump reiterated sentiments expressed in his State of the Nation Address, acknowledging that as ISIS networks are liquidated in the core locations of Syria and Iraq, remnants and mutants of the group are spreading out to other parts of the world. The Horn of Africa and the Great Lakes Regions are particularly vulnerable to this development, making Kenya’s regional leadership in the war against terrorism and violent extremism even more critical.

Ministry of Foreign Affairs of Kenya