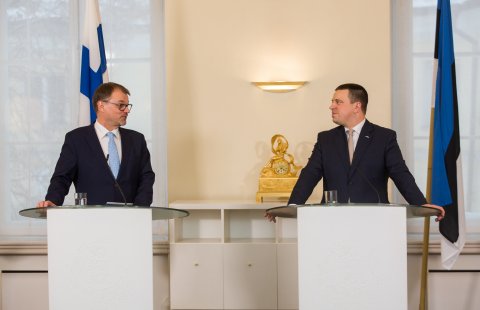 “Estonia and Finland are good partners and our cooperation is strong in every field. One excellent example is Finland’s recent confirmation that they are planning to join the Rail Baltic joint venture. Rail Baltic is a joint project that is helping to promote regional economic cooperation as well as the development of our region in general,” said Prime Minister Jüri Ratas.

The Finnish Government decided to join the Rail Baltic joint venture in January of this year.

The Prime Ministers talked about the challenges facing the European Union, for example, the departure of the United Kingdom and key topics during the Finnish presidency beginning in July, during which the European Union’s new budget will be discussed and a new team will begin to head the European Commission and other institutions.

“We agree with other European Union Member States that the best option for the departure of the United Kingdom is the current withdrawal agreement, although naturally we are ready for other types of scenarios. We await the steps and decisions of the United Kingdom,” said Ratas.

In addition, the Prime Ministers also touched on the topic of bilateral cooperation in the field of digital connections, amongst others.