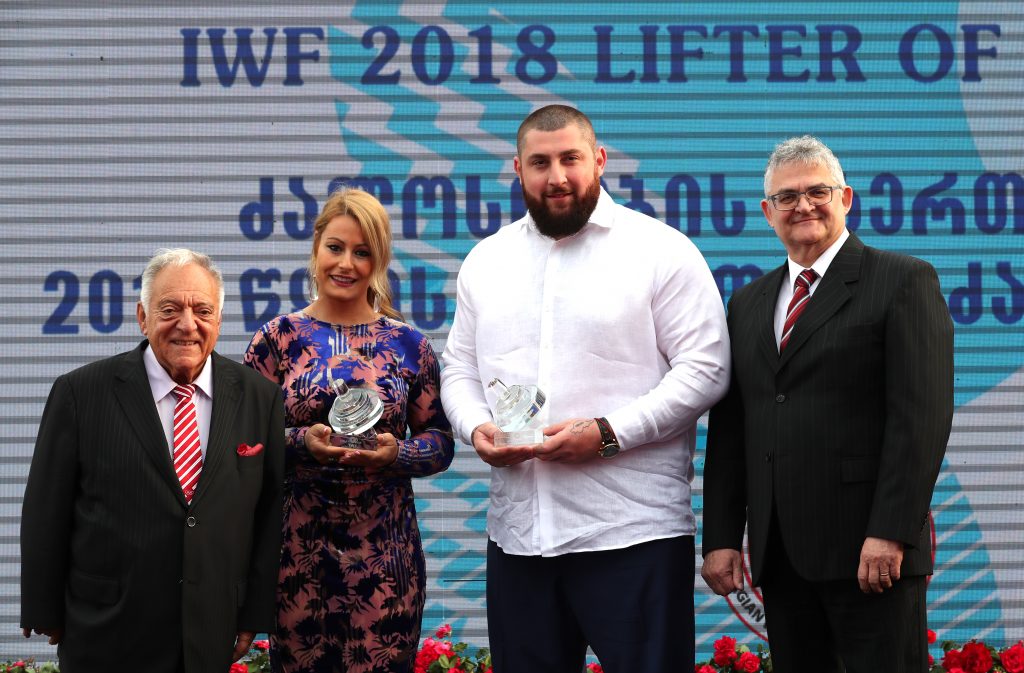 IWF celebrated the Lifters of the Year 2018 in the picturesque Black Sea resort, Kobuleti, Georgia.  The Jenő Boskovics Lifter of the Year Trophies were presented to the female and male awardees within a grand ceremony Monday night.

Spanish Lidia Valentin and Georgian Lasha Talakhadze were the protagonists of the evening after receiving the most votes at WORLD WEIGHTLIFTING’s traditional vote at the beginning of the year. The online poll closed with the same result as last year: after 2017, Lidia and Lasha proved to be the best again.

Dr Tamás Aján expressed his gratitude for the traditionally high-level and friendly reception of the Georgian Weightlifting Federation who did not disappoint this year either. The President praised the two Lifters of the Year, highlighting that besides being exceptionally successful, these two athletes are highly popular among fans. From more than 30.000 votes cast by visitors of iwf.net representing over 60 countries, Lidia received around 13.000 and Lasha 18.000 hits, both winning the poll by a large margin.

In her speech, Lidia Valentin emphasized how much it means to her to be selected for the title for the second time in a row and said she is very grateful to her fans and the Spanish national federation for the support she gets.

“Having a leading role in women’s weightlifting and earning this honour is a dream came true. An event like this brings people together, I am so happy to be a part of it.”

“Next on my agenda is the World Championships, then competing on more qualifying events for the 2020 Tokyo Olympic Games.”

Lasha Talakhadze told the audience, he feels even more motivated to perform well after receiving the Trophy for the second time and endorsed the Georgian weightlifting team and federation for their great work.

“I hope I can make weightlifting even more popular in my country and motivate young people to choose this great sport.”

“I am very proud of all the achievements of my team and grateful for their support. It is a wonderful feeling that the Award Gala takes place in my home country again and I can show the World how great Georgia and its people are.”

An excellent cultural show entertained the audience, including folklore dance, traditional Georgian singing and modern music. As the main event on the Gala, accompanied by the IWF President, Kornél Jancsó, Editor-in-Chief handed over the WW Jenő Boskovics Trophies to the winners.