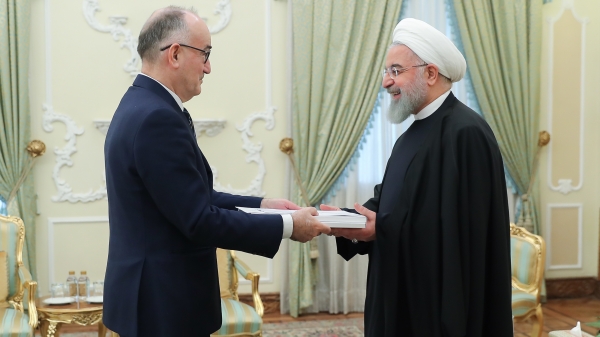 President said that the Islamic Republic of Iran and Croatia have close cultural and political bonds, adding, “Tehran is willing to establish close relations with Croatia in all fields of mutual interest”.

Speaking on Saturday while receiving the letter of credence of Drago Štambuk, the new Ambassador of Croatia to Tehran, Dr Hassan Rouhani stated that today, the European Union has taken its long overdue first step in the financial field.

“Of course, we are happy that the EU has showed that it can act independent of the United States’ furious face,” he said.

Dr Rouhani added, “Today, the world is facing a White House, the officials in which do not even believe in their own top intelligence and security figure”.

On US’ illegal sanctions against Iran, he said, “Today, the whole world and international organisations condemn this move and without a doubt, we will pass through these issues”.

“We believe that it is companies and nations around the world that will suffer losses here, companies that are determined to develop relations, but somebody is interfering in the relations among nations and governments,” he continued.

He also stressed development of Tehran-Zagreb economic relations, adding, “The two countries can have extensive cooperation in energy and financial affairs”.

The new Ambassador of Croatia to Tehran Drago Štambuk also presented his letter of credence to President Rouhani and said, “Croatia is very happy about the decision made by the EU and this can help develop relations between the two countries”.

“Croatia will use any opportunity to deepen relations between the two countries,” he said.