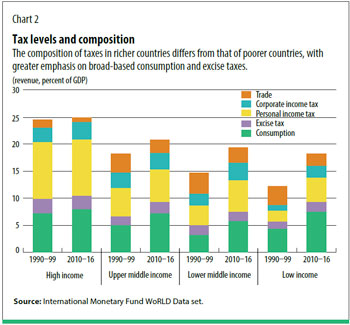 A key challenge for developing economies wishing to strengthen their social protection systems and expand access to education and health is how to raise the necessary revenue in the context of a large informal sector.

The informal sector is typically characterized by high levels of self-employment, low skill levels, and often multiple and volatile sources of income. This limits the potential to raise revenue by taxing income—especially from lower-income groups—which requires the ability to verify total individual income. In the context of social insurance, it also means greater reliance on financing through general government revenue sources than on the contributory models emphasized in advanced economies.

Recent research also finds that countries move to a higher growth path once tax revenue reaches about 15 of GDP (Gaspar, Jaramillo, and Wingender 2016), in part reflecting higher social spending. However, about half of low-income countries—and a third of emerging market economies—have tax ratios below this 15 threshold. Low tax ratios result in low levels of social spending (see Chart 1).

revenue from consumption taxes, especially value-added tax (VAT), has been the main driver for most countries that have managed to significantly increase their tax ratios over recent decades.