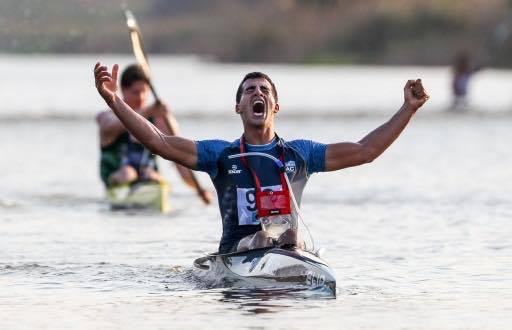 The International Canoe Federation and Elio Kayaks are excited to announce the signing of a two-year partnership which will provide a tremendous boost to the sport around the world.

Under the deal, Elio Kayaks will donate boats and provide financial support for the ICF’s important development programs, which takes canoeing to all corners of the globe.

Elio already has a significant presence in world canoeing. At the Portuguese national canoe sprint championships in the lead-up to the Rio Olympics, more than half the boats in the 200 metres A-final were Elio Kayaks.

For the past three years, Hugo Rocha paddling the new Elio SONIC has tasted victory. World champions Fernando Pimenta and Joao Ribeiro, along with Emanuel Silva and Diogo Lopes, also use the SONIC.

“Elio is already making a significant contribution to canoeing around the globe, so it made a lot of sense for the ICF to join in partnership,” ICF marketing manager, Catherine Wieser, said.

“It is especially exciting that Elio will be a major part of our development program. We are running camps all over the world, often in places where resources and equipment is very hard to source.

“So to have Elio step forward in this area will provide a great boost to the development of canoeing, and cement the sport’s reputation as a truly international competition.”

Elio’s SONIC was developed and tested to reduce the wave drag some other kayak models produce. The results have been very exciting.

It has also recently unveiled a new seat system, the first in canoeing competition that can be adjusted by the millimetre. Elio Kayaks has made similar developments to the kayak foot rest.

The company’s main area of focus is canoe marathon, sprint and surfski.

“Elio was present in the most important events of the sport in the last three years, including sprint and marathon world and European championships,” CEO Elio Nogueira said.

“We also had a strong presence at the world and European surfski world championships with our MAZU brand. It has helped us open up markets in Australia, Central and North America and Asia.

“Our partnership with the ICF will bring us value as a builder. I have no doubt that our products are as good, or probably even better, then many others in the market.