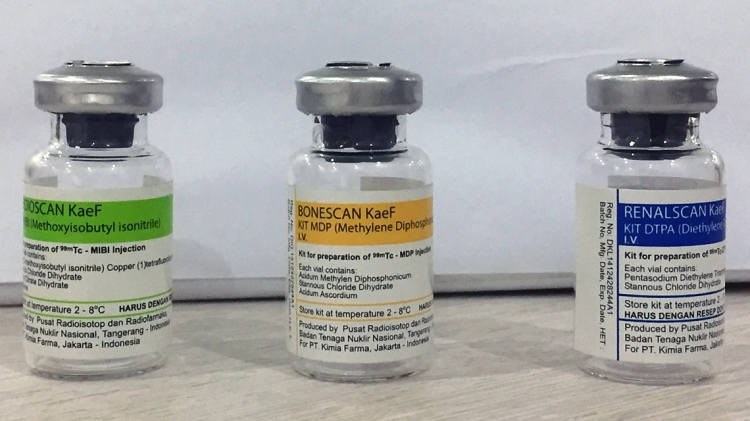 Indonesia Develops Radiopharmaceutical for Diagnosis of Tuberculosis outside the Lungs

A new technique developed over the last few years is much more accurate and painless for the patient. Diagnosis using nuclear medicine relies on the use of molecules that emit a tiny bit of radiation – enough to be detected using a gamma camera, but too small to cause harm when applied in line with accepted protocols. These tests provide results within just one to four hours.

While several radiopharmaceuticals are able to detect TB, they are not specific enough to the disease and hence cannot be used for clinical diagnosis. The key to the success of the research has been to find a molecule – ethambutol – that binds specifically to the bacillus Mycobacterium tuberculosis, which causes TB. Attaching a radioactive isotope of technetium – 99mTc – to ethambutol provides researchers with a compound that binds selectively to the TB bacteria, accumulating in the site of the TB lesion, while at the same time being detectable.

A 2018 article in the Annals of Nuclear Medicine by a researcher from BATAN and two medical doctors documented, for the first time, that the compound offers superior diagnostic characteristics compared to traditional methods. “This is a major breakthrough that allows us to support the Government’s efforts for increased diagnosis of extra-pulmonary TB around the country,” Nazir said. Combatting TB, which affects particularly the urban poor, has become one of the governments’ top public health priorities as urbanization and poor sanitary conditions have led to the spread of this infectious disease. The Government has set out to eliminate TB by 2030.

If approved, 99mTc-ethambutol will add to the growing repertoire of radiopharmaceuticals and diagnostic kits developed and produced by BATAN at its site next to Indonesia’s largest research reactor, whose radioactive energy provides the radioactive compounds of the drugs. BATAN’s researchers acquired much of the know-how from and through the IAEA over the last quarter century, Lubis said. They have participated in several technical cooperation projects, are active in coordinated research projects, and several researchers benefitted from fellowships and short courses at leading research institutions in Japan, the Philippines, South Korea, Thailand and various European countries. The IAEA has, through its technical cooperation programme, recently donated a gamma spectrometer for use in the quality control of radiopharmaceuticals manufactured at BATAN.

BATAN is the only domestic manufacturer of radiopharmaceuticals in Indonesia, though its market share cannot be estimated due to the lack of industry-wide data, said Wida Rahayu, a project manager at Kimia Farma, the majority state-owned company that commercializes the radiopharmaceuticals produced at BATAN. These include compounds used for the diagnosis of various types of cancers and heart conditions as well as painkillers for terminally ill cancer patients, representing an alternative to morpheme. Several other compounds for use in cancer treatment are currently under licensing and registration. For the time being, these products are available only in Jakarta and Central Java, so scaling up production to be able to supply the rest of the vast country is planned, she said.

For BATAN it is important to move from pure research to the production of radiopharmaceuticals, though as a research institution it cannot do so on a commercial basis, said BATAN Chairman Djarot Wisnubroto. Increasing production of these compounds will contribute to the sustainability of the institution, earning more of its income from the market, which is a government expectation, he added.

Soon, nuclear institutions from across Asia will be able to learn from BATAN’s experience in this area under a new IAEA regional technical cooperation project on Promoting Self-Reliance and Sustainability on National Nuclear Institutions. Under this regional project, BATAN in cooperation with Kimia Farma, will develop a case study on the production of radiopharmaceuticals, with emphasis on product development, licensing and certification.

“We will be happy to share our experience and also learn from others through this regional initiative,” Wisnubroto said.