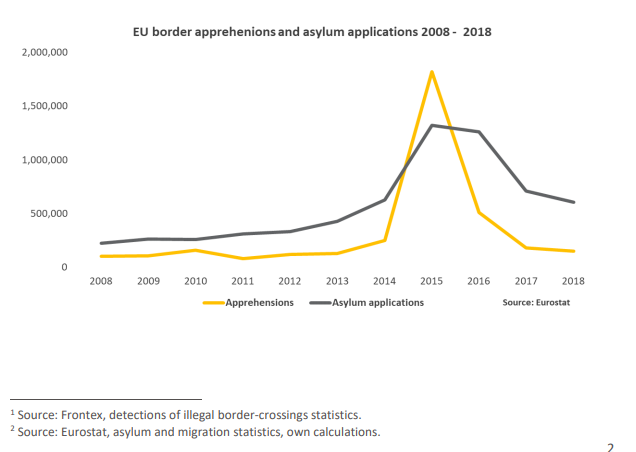 General migration situation in 2018 In Europe

The migration debate is dominated primarily by issues surrounding irregular migration and asylum migration, so indicators on these two factors deserve special examination. The general tenor in politics and media coverage suggests an easing of tension in the situation. Reference is often made to a massive reduction in irregular migration to the EU. It reached its lowest level in five years in 2018. Although this viewpoint is not incorrect, it warrants more precise elaboration. A total of 150,000 illegal border crossings were registered in 2018. This number was in fact as low in 2018 as it had been since 2013 and amounted to only about of the figure recorded for 2015 (1.82 million). The main routes shifted away from the Libya – Italy route in the central Mediterranean (a reduction of 80% compared to 2017) to the Morocco – Spain route in the western Mediterranean (an increase of 100% compared to 2017).1

However, the figures for asylum applications in 2018 suggest that the Mediterranean routes may not be the only way of getting to Europe. The number of asylum applications fell again in 2018 but not as sharply as the number of illegal border crossings. Although final figures are not yet available, it can be assumed that the total number of applications for the EU will end up at around 630,000. 2 That would be about 13% fewer applications than in 2017 (when the total was about 712,000) and about 51% fewer than in the peak year 2015 (1.3 million). The figure for 2018 would nonetheless be the fifth highest in the past 25 years.

Countries of origin for the applicants in 2018

The nations topping the list for most applications were Syria (13.7%), Afghanistan (7.1%), Iraq (7.1%), Pakistan (4.3%), Nigeria (4.1%), Iran (3.9%), Turkey (3.7%), Albania (3.3%), Eritrea (2.6%), Russia (2.5%) and Somalia (2.1%).3 The applicants originate – not exclusively but predominantly – from conflict regions within a wider radius of Europe. Asylum migration is largely conflict-induced in the European context. This means, in turn, that developments in global conflicts will fundamentally shape what happens in the asylum sector in the future, too.

Hot spots in 2019 and possible consequences for Europe

The factors that will shape the European migration situation in the near future are found in the “conflict belt” of the Near and Middle East and in North Africa. Of course, other regions in Africa and Asia are just as important, but any major and spontaneous refugee movements in 2019 would likely originate in this conflict belt.

In Syria, the battle for Idlib and the announced withdrawal of the US could drive an additional million Syrians to flee to Turkey, already host to more than 3 million Syrian refugees.

In Iran, the US sanctions have exacerbated the economic and political situation. On the one hand, this could lead to an increase in asylum applications from Iran in the EU but on the other hand, the situation in Iran is intensifying the exodus of Afghan nationals from Iran to their home country. Their stay in Iran is largely just “tolerated”. In the past, they took on low or poor paying jobs, which will now disappear. In 2018, an estimated 730,000 Afghans already returned from Iran to their home country and this trend will continue in 2019. Increased migration pressure is expected in the direction of Turkey and beyond in the direction of Europe.

The situation In Libya remains highly volatile. The country is still divided, politically unstable, and at risk of experiencing a breakdown in civil order. The various governmental, quasi-governmental and non-governmental players are central to European foreign policy on migration as key political and practical partners of Europe in the control of the central Mediterranean route. If this cooperation were to collapse, Libya would become a hot spot of irregular migration to Europe again in no time at all.

The Russia-Ukraine conflict could flare up again at any time in 2019 as well. It can be assumed, however, that any refugee movements would head in the direction of Russia or Poland and be largely absorbed by the labour markets there. The list could be continued of course.

One thing that can be said in any event is that the conflict situations in this conflict belt can lead at any time to the displacement and flight of large populations, also in 2019. These kinds of events are possible at any time, they are probable, but they are of course not inevitable. As a rule, large refugee movements remain limited to the local area initially. In other words, Europe would be affected primarily in the subsequent years of this escalation. The crisis is by no means over. We are merely in a quieter phase of a long-term crisis.