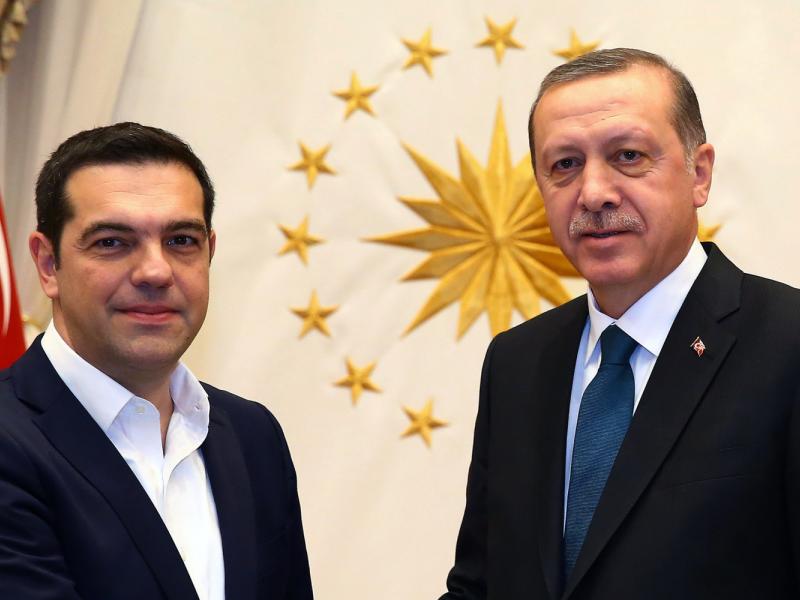 My relationship with President Erdogan is based on respect, honesty and directness. It is based on a constant effort to build the relations that our countries ought to have in the 21st century and the relations which correspond to the history of our peoples and the friendship that has been developing between them.

This relationship was challenged in very difficult moments, but allowed us to consolidate channels of communication on many levels, to overcome obstacles and to be able, today, to speak of a positive agenda.

Greece and Turkey proved for the first time, in 2015-2016, that they can cooperate in confronting major international challenges, like the refugee crisis. In this framework, I visited Turkey three times, we cooperated on the EU-Turkey Statement, the strengthening of EU-Turkey strategic cooperation and the promotion of the NATO Action in the Aegean. As a result, illegal flows and especially deaths in the Aegean, drastically decreased. We promoted energy cooperation through the Transadriatic Pipeline and the discussion on extending Turkish Stream to Europe, through Greece. We worked on the ferry link between Thessaloniki and Izmir, the train connection between Istanbul-Thessaloniki, the improvement of the border entrance in Kipoi-Ypsalla and we put again on the table the development of trade and investments. Foreign Ministers Kotzias and Cavusoglu organized a new round of exploratory talks, while there were also military to military talks on confidence building measures and decreasing tensions in the Aegean. In parallel, the Foreign Ministers exchanged visits focusing on Cyprus, while for the first time we sat on the table and discussed the security dimension of the issue, coming close to its resolution. In 2016, during the coup attempt, I was one of the first foreign leaders who called the President and publically expressed my support against the coup plotters.

Nevertheless, after this period, the climate of our relations worsened. Unfortunately, provocative rhetoric was intensified, there were no more exploratory talks or talks on confidence building measures, while aggressive Turkish aeronautical activity in the Aegean reached a peak and as a result, very dangerous incidents took place. The issue of the Turkish soldiers became a challenge in our relations. And the arrest of two soldiers further burdened these relations.

Obviously, things have to change. Despite these difficulties, in December 2017 we had the opportunity to welcome a Turkish President to Greece, for the first time after 65 years, while I met with the President another two times last summer.

There were some steps and the two soldiers returned to Greece, while we returned two soldiers to Turkey when they crossed the land borders to Evros a few months ago.

Nevertheless, during my visit I believe we will have the chance to continue the difficult, but frank dialogue we started in December 2017 and to pick up our positive agenda from where we left it. Greece is opening a new historic chapter in 2019, leaving behind economic programs and the crisis, returning to growth and the international markets, deepening human rights, resolving problems with its neighbours like North Macedonia or Albania and becoming a pillar of peace and stability in the region through new formats of cooperation in the Balkans and the Eastern Mediterranean.

The conditions must be created, also in Greek-Turkish relations, for historic steps to take place. We must build a relationship of mutual respect, based on international law, to the benefit of our peoples, but also the broader region.

I believe that – independently of developments like elections in Turkey or Greece – we must consistently work for a fair and viable solution of the Cyprus issue on the basis of decisions of the UN Security Council, since the reunification of the island on this basis, is the only possible solution. A solution that will allow a federal Republic of Cyprus to be a normal state in the EU and to function to the benefit of the people of Cyprus as a whole, Greek-Cypriots and Turkish-Cypriots. To reach this point I believe A) we should agree on a text of “Terms of reference” that reflects the Gutteres framework that was on the table when we interrupted the talks in Crans Montana, B) there should be substantive progress in the intercommunal talks and C) (in relation to Greece) we must hold effective preparatory meetings on security. The crucial issue here, is the position of Turkey in relation to the above.

I believe that Turkey has taken over the great burden of hosting 4 million refugees. That should always be recognized by the international community and the EU should do all it can to support our neighbor. I also believe that we have a very important level of cooperation with Turkey on the basis of the EU-Turkey Statement, which we should intensify, because especially the Greek islands have been overburdened in the last years.

Asylum procedures in all of Europe have been put to the challenge since the crisis of 2015, while in many countries procedures are still slow. Greece has one of the fastest procedures, but we are working hard so that these procedures, that respect international law, become even more effective to the benefit of asylum-seekers and the local communities in Greece. The EU, from its part, has to find a way to strengthen the support it shows to countries that are the most affected from the flows and to reject agendas that are not compatible with European law or humanitarian principles.

Of course the Treaty of Lausanne is the applicable international conventional regime regarding minorities, so we inform each other on relevant developments on this basis. From that point on, the promotion of reforms on the rights of the Muslim minority constitutes a commitment of the Greek Government to the citizens of Greece and not a bilateral matter with Turkey. In this framework, we have made important steps until now on the implementation of Sharia law, the structure and function of the Mufti offices and educational issues. We will continue in this direction.

Office of the Prime Minister of Greece