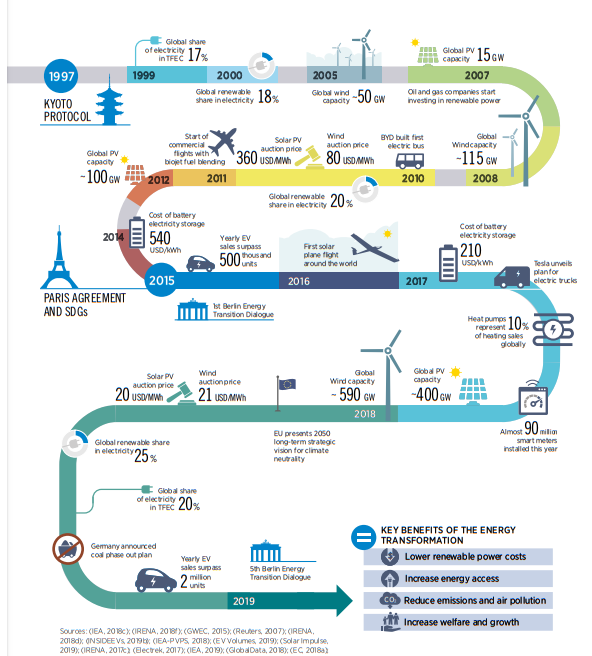 Highlights of the report:

ELECTRIFICATION WITH RENEWABLE POWER can start to reduce energy-related carbon dioxide (CO2) emissions immediately and substantially. The pairing is also getting cheaper than fossil fuel-based alternatives, lowers local air pollution and increases health benefits, results in positive socio-economic benefits and will be a key enabler to build a connected and economy and society. Electrification, when paired with renewables, goes hand-in-hand with energy efficiency, resulting in lower overall energy demand.

By 2050 ELECTRICITY could become the central energy carrier, growing from a 20% share of final consumption to an almost 50% share – and, as a result, gross electricity consumption would more than double. Renewable power will be able to provide the bulk of global power demand (86%). The primary drivers for this increased electricity demand would be over 1 billion electric vehicles, increased use of electricity for heat and the emergence of renewable hydrogen. Overall, renewable energy would supply two-thirds of final energy.

For every USD 1 spent for the energy transition, there would be a PAYOFF of between USD 3 and USD 7 – or, put in cumulative terms over the period to 2050, a payoff of between USD 65 trillion and USD 160 trillion. The energy transition requires fewer overall subsidies, as total energy sector subsidies can be reduced by USD 10 trillion over the period. The focus of subsidies will need to change progressively, however – away from power and fossil fuels and into energy efficiency technologies and solutions needed to the industry and transport sectors.

The level of ADDITIONAL INVESTMENTS needed to set the world on a more climate-friendly path above current plans and is USD 15 trillion by 2050 – a significant sum, but one that decreased by over 40% compared to the previous analysis due in large part to rapidly falling renewable energy costs as well as opportunities to electrify transport and other enduses. Overall, total investment in the energy system would need to reach USD 110 trillion by 2050, or around 2% of annual gross domestic product (GDP) over the period.

Annual ENERGY-RELATED CO2 EMISSIONS in the REmap Case decline 70% below today’s level. An estimated 75% of this reduction can be achieved through renewable energy and electrification technologies; if energy efficiency is included, then this share rises to over 90%. However, the world is on a much different path: energy-related emissions have risen by over 1% annually, on average, over the last five years. Current plans and policies, including Nationally Determined Contributions (NDCs), result in a similar level of annual emissions in 2050 compared to today, which risks putting the world on a pathway of 2.6 degrees Celsius of temperature rise or higher already after 2050. The report shows that emissions would need to be reduced by around 3.5% per year from now until 2050, with continued reductions after that time. Energy-related emissions would need to peak in 2020 and decline thereafter.

Any energy transition roadmap will interact with the evolution of the socio-economic system upon which it is deployed, producing a series of outcomes that can be understood as the SOCIO-ECONOMIC FOOTPRINT. The degree to which this footprint includes benefits or less outcomes depends on the synergies between the energy transformation and the evolution of the socio-economic system. The balance between benefits and less outcomes varies by region due to their diverging transformation ambition and different socio-economic dynamics.

TECHNOLOGY is progressing rapidly, and solutions exist today that are deployable at large scale and are increasingly cost-competitive. Governments are lagging and should implement more aggressive climate, renewable energy energy efficiency policies and targets. Importantly, they should align climate and sustainability targets with energy plans, and they should value these plans beyond just the effect on the energy sector and take a more holistic, socio-economic view. The Sustainable Development Goals, and the revisions of provide an opportunity for governments to work regionally and internationally to drive action.

SYSTEMIC INNOVATION is crucial as a key enabler for the energy transition. Countries need to devote more attention to enabling smarter energy systems through digitalisation, through the coupling of sectors via greater electrification, and by embracing decentralisation trends. This innovation also needs to be expanded beyond technology and into markets and regulations as well as new operational practices in the power sector and business models.