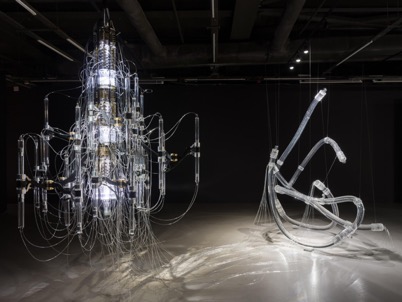 What happens when scientists and artists collide? Artworks resulting from three years of collaboration between physicists and Collide International artists-in-residence at CERN, the world’s largest particle physics laboratory, will be exhibited at Broken Symmetries in FACT Liverpool, UK, from 22 November 2018 to 3 March 2019.

Broken Symmetries comprises artworks by 10 international artists that delve into scientific fact and challenge our perception of reality by performing or interrogating theories and experiments.

Among those on display is Yunchul Kim’s Cascade, exploring the potentialities of matter by using the pattern of electrically charged subatomic particles called muons. Kim, a Seoul-based artist, was the recipient of Collide International 2016 artist-in-residence. When muons are detected, the experiments’ tubes flash with light. These beautiful objects visualise not only a kinetic experience, but also a living organism that interacts with its environment.

Muons are among the elementary subatomic particles studied by CERN physicists. The signal they leave as they exit the ATLAS and CMS detectors on the Large Hadron Collider was a key physics signature in the discovery of the Higgs boson.

The Arts at CERN programme fosters connection between science and arts by extending artistic practice and creating a space for artists to partner with physicists and engineers. Together, they are given the opportunity to explore different approaches to curiosity and creativity. Collide International, coordinated by Arts at CERN, collaborates with a leading international cultural institution for a three-year period. The artists are invited to further their artistic practice in connection with fundamental research at CERN during their three-month residency.