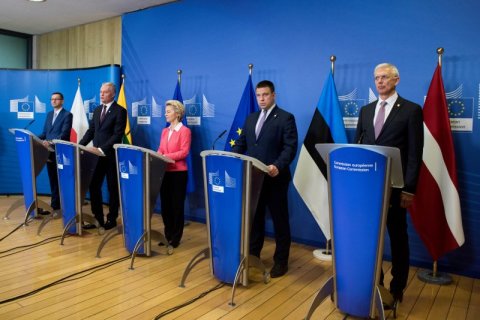 The Government heads of the Baltic states, Poland, and the President of the European Commission Ursula von der Leyen confirmed their commitment to synchronising the Estonian, Latvian and Lithuanian electrical system with that of Continental Europe by 2025.

Prime Minister Jüri Ratas welcomed yesterday’s Connecting Europe Facility Committee’s decision to allocate 720 million euros to the Baltic states and Poland for finalising the connection of electrical systems to Europe. “We will proceed quickly with the works in order to finish by 2025,” said Ratas, who thanked the President of the European Commission Ursula von der Leyen for her strong political support.

The funding will support, for example, the construction of the new submarine cable, Harmony Link, of Poland and Lithuania, and the construction of two synchronous compensators in Estonia, in the amount of 55 million euros. The proportion of aid in the projects is 75%. This is the biggest financing decision in the current history of energy projects of the Connecting Europe Facility.

“Connecting the electrical grids of the Baltic states to Continental European grids via Poland increases the energy security of Estonia, Latvia, Lithuania and Poland, and helps to achieve the goals of the Green Deal,” said the Prime Minister.

Ratas noted that as this year’s leader of Baltic cooperation, Estonia is glad that an agreement has been reached in terms of electricity trading between the Baltic states and third countries.

On 24 September, the Baltic states reached an agreement on the principles of electricity trading with countries outside the EU, after the commissioning of the Astravets Nuclear Power Plant in Belarus. With this agreement, trading between the Baltic states and third countries will estimably decrease by half, and trading will be redirected to the Russia-Latvia cross-section. This agreement will remain in force until the synchronisation of Baltic electrical grids in 2025.