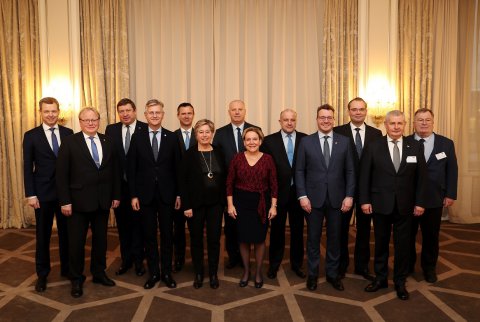 Yesterday, Minister of Defence Jüri Luik participated in the meeting of Nordic and Baltic defence ministers, where the discussion focused on the question of regional security and the future of various European defence initiatives, and in today’s meeting of Northern Group defence ministers, where a tabletop exercise in military mobility was carried out and UN international peacekeeping reforms were discussed.

The goal of the tabletop military mobility training exercise was to find ways to reduce the amount of bureaucracy and improve the opportunities for using infrastructure and transport in situations in which it is necessary to move a significant number of forces.

Countries each have a different experience in this area, and during the course of the training exercise, the ministers shared these experiences. Bottlenecks were identified, although new proposals were also made for further action to be taken in improving military mobility.

According to Minister of Defence Jüri Luik, a training exercise such as this one is especially important to Estonia, since the speed at which NATO forces could reach us is a decisive factor.

The minsters admitted that Trident Juncture, the recent large-scale exercise held in Norway, in which 31 countries and 50,000 soldiers and officers took part, provided an excellent opportunity to actually practice the movement of forces across Europe during a crisis.

In addition, at their meeting, the ministers of defence of the Northern Group discussed the current state and future of UN peacekeeping operation reforms.