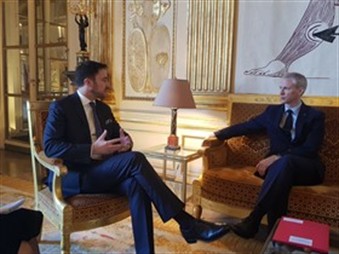 The two ministers discussed the cooperation projects that are being implemented on the basis of the already signed Agreement on cooperation in the field of culture, as well as on new exchange initiatives.

Furthermore, they discussed the intensification of cooperation and exchange of programmes and artists in the fields of music and theater, visual arts, as well as the possibilities for translating Montenegrin literature into French and French into Montenegrin.

The ministers also discussed the exchange of good practices and experiences in the field of cultural heritage protection, project development and exchange of programmes between libraries, museums, archives and cinemas.

Minister Bogdanović informed Minister Riester about the activities that are being implemented in Montenegro in order to transfer the remains of members of the Petrović Njegoš dynasty to Montenegro in the near future, and pointed out that the support of the Ministry of Culture and other relevant institutions of the Republic of France will be of particular importance in the transfer of the remains of Mihailo Petrović Njegoš, buried in Paris.

Minister Riester pointed out that the Republic of France appreciates the importance this initiative has for Montenegro and its last ruling Petrović Njegoš dynasty and stated that they would provide all the necessary assistance.