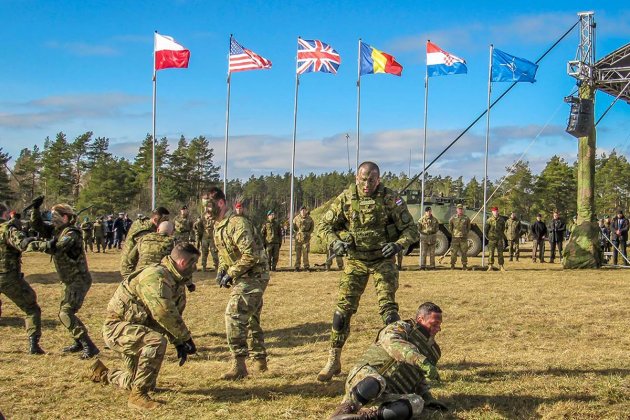 The members of the 3rd HRVCON to NATO’s Enhanced  Forward Presence in Poland took part in the marking of the 20th anniversary of the accession of the Republic of Poland to NATO the Training Range “ Piskie” on 6 March.

The ceremony featured the formal line-up  and an exercise displaying tactical and tehnical capabilities of the Polish Armed Forces and NATO Battlegroup in Poland.

The marking ceremony was attended by senior officials headed by the President of the Republic of Poland  Andrzej Duda, and the Croatian Ambassador H.E: Tomislav Vidoševič and and Defence Attaché to Poland  Colonel Jugoslav Jozić.

The tactical exercise of the joint Battlegroup and the Polish Armed Forces engaged the members of the Croatian Armed Forces  operating the 122-mm M-92 “VULKAN” MRLS, and the static display of the combat vehicles used by the exercise participants, during which the Polish President met with the Croatian soldiers and saw their assets and equipment.

In recognition of their contribution in the Battlegroup President Duda presented the Commander of the 3rd HRVCON, Captain Željko Trčak and the commanders of the U.S., British and Romanian components with Polish state flags.

Ministry of Defence of Croatia