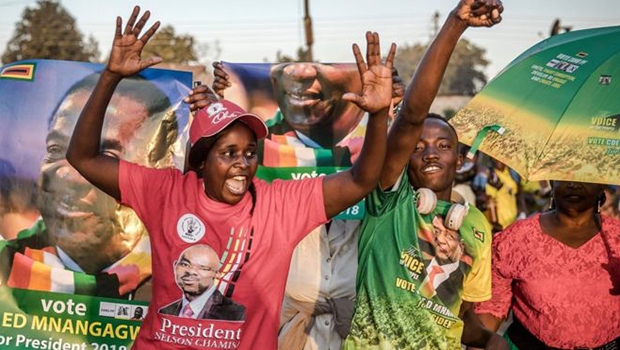 Harare, 2 August.  Voting in Zimbabwe’s general elections had been largely peaceful and well-organised, according to Commonwealth observers on the ground.

However, violence broke out on 1 August during a demonstration by supporters of the MDC Alliance, the main opposition party.  Protestors clashed with armed police and military resulting in three deaths.

The Chair of the Commonwealth Observer Group, John Dramani Mahama, expressed regret at the development and offered his sympathies to the families of those who were killed.

Final results are yet to be released by the Zimbabwe Electoral Commission (ZEC).  Mr Mahama requested all sides to be tolerant and peaceful while tabulation continues.  He urged ZEC to release full results as soon as possible, pointing out that delays create opportunities for citizens to speculate about the potential to manipulate results.

It is the first time the Commonwealth has observed elections in Zimbabwe since the country withdrew its membership in 2003.

Mr Mahama, a former president of Ghana, commended the people of Zimbabwe for their enthusiastic and – until the violence of 1 August – largely peaceful approach to the elections.  He said the 2018 vote represents progress for the country in the consolidation of its democracy.

“It is often the results phase, including the acceptance of the results, that presents the greatest test of leadership, and demonstrates the greatest commitment to democracy,” he said.  “We take this opportunity to urge all parties and supporters to remain calm and tolerant.  Political leaders should be magnanimous in victory and gracious in defeat.”

The Commonwealth team was deployed to all ten provinces of Zimbabwe and visited 360 polling stations, where they observed the pre-election environment, the voting process and counting of ballots.

“We noted the long queues and early turnout. Their commitment to democracy inspires us. We are confident that as the results process progresses, the hope of a peaceful and prosperous Zimbabwe has been rekindled in every citizen.”

Mr. Mahama said the state broadcaster, Zimbabwe Broadcasting Corporation had “a patent tilt in coverage in favour of the governing party.”

For the first time in Zimbabwe, there were four female presidential candidates. However, observers were informed that during the political party primaries very few women candidates were successful, leading to concerns of a further decline in women’s representation

“We were equally concerned about allegations of the use of social media to abuse women candidates as well as the chairperson of the Zimbabwe Electoral Commission,” said the Commonwealth chair.

The Commonwealth Observer Group arrived in Harare on 23rd July and received briefings from a wide range of stakeholders, including ZEC, political parties, civil society organisations, faith-based groups, media representatives and diplomats.  Its final report will be considered as part of Zimbabwe’s application to rejoin the Commonwealth

“We urge all stakeholders to be patient, and allow ZEC to perform its role without interference. Our experience across the Commonwealth shows that every election management body, no matter how mature, can improve.  What matters is that it listens and improves in subsequent elections,” he concluded.