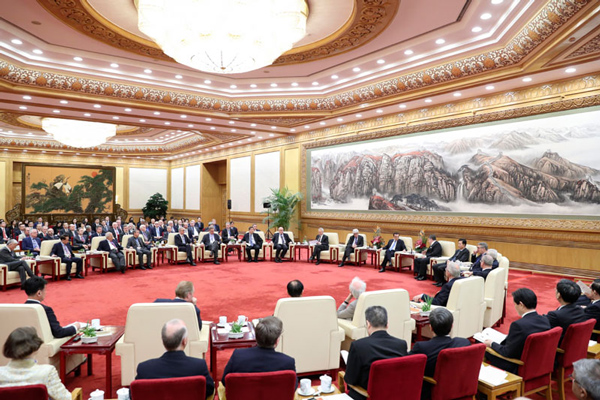 Premier Li Keqiang said on Jan 25 that China will continue to expand openness and provide greater convenience for foreigners to work and live in the country.

He made the remarks at a symposium attended by foreign experts working in China ahead of Lunar New Year, which falls on Feb 5 this year, at the Great Hall of the People in Beijing.

The Premier extended his gratitude to foreign experts for their unswerving commitment to China’s reform and opening-up as well as their valuable opinions on the Government Work Report.

The key experiences to China’s success in reform and opening-up lay in its rapidness, stability and inclusiveness in growth, said Paul Romer, Nobel laureate in economics and a professor at New York University. He said the government can encourage schools and universities, with special incentive mechanisms, to open the doors to all students, both rich and poor.

Meanwhile, as a person’s ability to be employed needs educational and vocational training, every student, regardless of family background, should be given access to education, the Premier said.

The government has promoted inclusive financing to encourage capital flow into medium and small enterprises, for these enterprises are the backbone of employment, Premier Li said.

“We encourage inclusive development, not exclusive ones,” he added.

Peter Sachsenmeier, a member of the National Academy of Sciences and Engineering of Germany and a professor at Oxford University, offered proposals in intelligent manufacturing and circular economy.

Premier Li said China welcomes suggestions from foreign experts as it is promoting construction of the industrial internet, which is regarded as the key to lifting China’s manufacturing and an important platform to develop modern services.

Premier Li said all domestically-registered universities can have equal access to research programs and funds initiated by the Chinese government, as long as they are in accordance with WTO rules.

The Premier said that he hopes more Chinese-foreign cooperatively-run institutions will win in the competition and this will deliver to society China’s resolution and willingness to expand openness and cooperation.

Basic researches to be strengthened

Konstantin Novoselov, a Nobel laureate in physics and a professor at the University of Manchester, suggested China increase input in basic research to bring about more innovative results.

The Premier said due to the huge market and rapid economic growth, China quickly develops in utilization of technologies while its basic research needs to be strengthened.

After the discussion, Premier Li said China retained a steady economic growth with a 6.6 percent annual GDP increase last year. It was a hard-won achievement as it is on the basis of China’s high economic output, fairly sufficient employment and continuous improvement of the environment, the Premier said.

It also comes after hard work by the Chinese people, as well as foreign experts and foreign-invested enterprises, he added.

Against the backdrop of complicated international situations, China may encounter fluctuations in economic development in the short run, but the country is fully confident and capable of keeping economic growth rate within an appropriate range and achieving long-term growth.

The basic front of China’s economic development will keep a good momentum, as China has a huge domestic market and rich human resources of nearly 1.4 billion people, including 900 million workers and 170 million people who received higher education or have professional skills. This is where the greatest potential for China’s development lays, Premier Li said.

He added China will unswervingly promote its reform and opening-up to inspire the vitality and creativity of some 100 million market entities through efforts in streamlining administration and larger-scale reduction in taxes and fees.

China is committed to opening wider to the outside world and learning advanced technology and experience from foreign countries, he said.

Premier Li said China welcomes competitive goods and technologies from overseas to come to China, and will protect IPR for faster commercialization of results in technological innovation.

Welcoming foreign experts to work in China, Premier Li said China will further improve policies to better facilitate their work and life and hopes that they will offer more advice to promote the common development of China and the world.