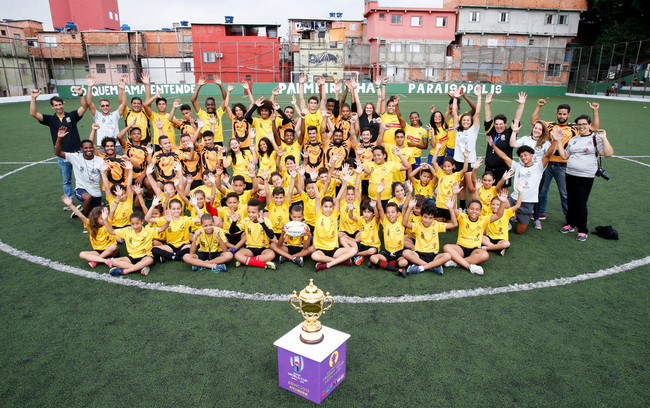 Community rugby programmes were at the heart of the tour, with ‘Rugby e Nossa Paixao’ and ‘Rugby Para Todos’ demonstrating the power of rugby for good

Bianca Silva, member of World Rugby’s ‘Try and Stop Us’ women in rugby campaign and her Brasil Rugby team mates are inspiring the next generation of players

The future for rugby in Brazil looks bright, with recent Nielsen research finding there to be more than 16 million fans, and the men’s 15s team at an all time high of 24 in the World Rugby rankings

The trophy began its tour in Rio de Janeiro, where the trophy joined Rio Rugby Club and local players from ‘Rugby e Nossa Paixao,’ for a training session on the world famous Copacabana beach.  Training in the sun under the rugby posts that were erected ahead of the Rio 2016 Olympic Games, when rugby sevens made its Olympic debut, the session had a distinct carnival feel. Rugby e Nossa Paxiao means ‘rugby is our passion’ and works with young people from local favela communities, using rugby to promote values such as respect, teamwork, and solidarity in the players, skills they can continue to use into their adult life.