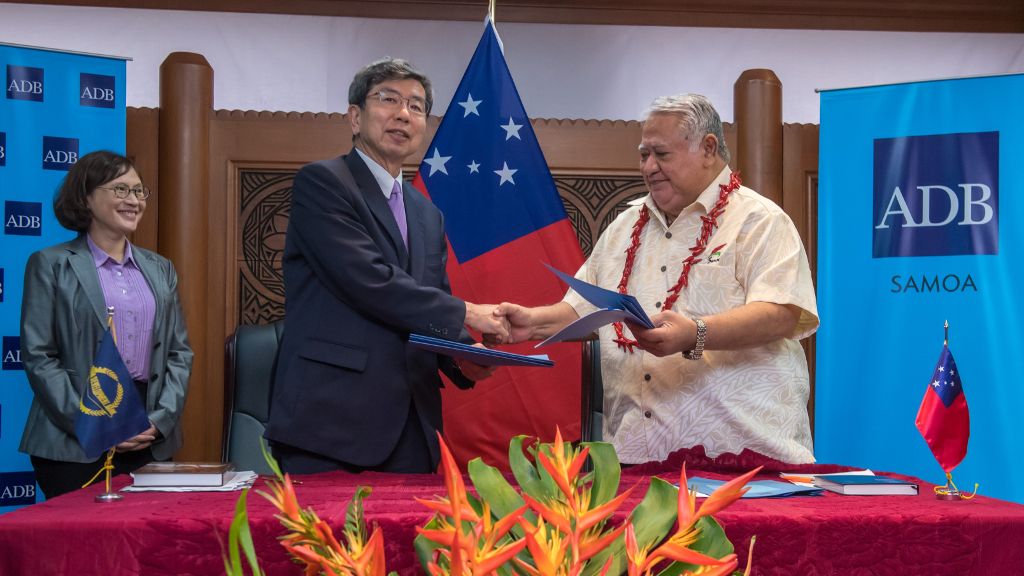 Economic growth in Samoa slowed to 0.9% in the fiscal year ending 30 June 2018 following the closure of Yazaki Samoa, an automotive parts maker that was the country’s largest private employer. Growth is expected to rebound in the current fiscal year as visitor arrivals increase and infrastructure investment expands in the lead-up to Samoa’s hosting of the Pacific Games in 2019.

ADB has supported development of Samoa’s energy sector since the early 1990s. Projects cofinanced with Australia, Japan, New Zealand, and the European Union have installed almost two-thirds of the country’s current generation capacity of 45 megawatts. ADB, Australia, and the World Bank supported the development and operation of a submarine cable fiber-optic system linking Samoa to Fiji. The Tui Samoa cable, launched in February 2018, will provide cost-effective internet connectivity and facilitate e-health investment.

ADB has committed $358 million in loans, grants, and technical assistance to Samoa since 1966 to support the government’s development priorities. Of this funding, $287 million was from the Asian Development Fund (ADF), which provides concessional financing to ADB’s lower-income developing member countries. Given Samoa’s vulnerability to the impacts of climate change, ADF financing terms were changed to 100% grant in January 2018.

Future support will continue to focus on economic infrastructure such as power, roads, and ports, as well as public sector management. Total financing from ADF for Samoa, including resources mobilized from ADF funds allocated for regional initiatives, could reach $100 million in 2019-2020. In addition, ADB will mobilize cofinancing from development partners such as Australia, New Zealand, the Green Climate Fund, and the World Bank.

Mr. Nakao and the Prime Minister signed a host country agreement establishing a permanent ADB country office in Samoa. The office replaces the ADB extended mission in Samoa opened in 2016 to manage the bank’s growing operations in the country.