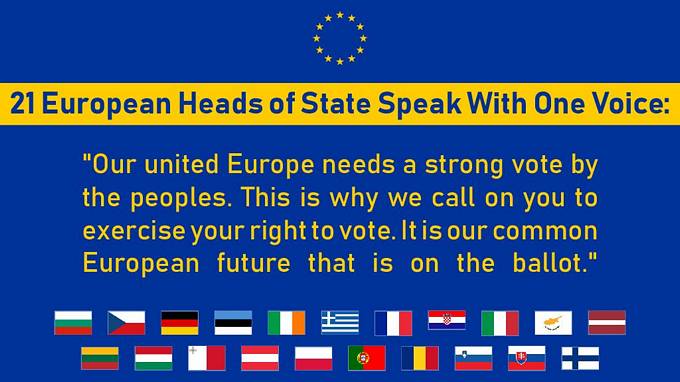 Europe is the best idea we have ever had

European integration has helped to realise a centuries-old hope for peace in Europe after unbridled nationalism and other extreme ideologies led Europe to the barbarity of two world wars. To this day, we cannot and should not take peace and freedom, prosperity and well-being for granted. It is necessary that we all engage actively for the great idea of a peaceful and integrated Europe.

The 2019 elections are of special importance: It is you, the European citizens who decide which path the European Union shall follow. We, the Heads of State of Bulgaria, Czech Republic, Germany, Estonia, Ireland, Greece, France, Croatia, Italy, Cyprus, Latvia, Lithuania, Hungary, Malta, Austria, Poland, Portugal, Romania, Slovenia, Slovakia and Finland therefore call on all European citizens who are entitled to vote to take part in the elections to the European Parliament at the end of May 2019.

The peoples of Europe have united out of their own free will in the European Union, which is founded on the principles of liberty, equality, solidarity, democracy, justice and loyalty within and between its members. A Union which is unprecedented in the history of Europe. In our European Union, the elected Members of the European Parliament, along with the Council of the European Union, that is, the Governments of all Member States, decide which rules should apply in Europe and how Europe’s budget should be spent.

We are all Europeans

For many people in Europe, particularly among the young generation, their European citizenship has become second nature to them. It is not a contradiction for them to love their village, town, region or nation and to be committed Europeans.

Our Europe is able to meet challenges together

Views on these matters differ among the citizens and governments of the Member States, as well as between us Heads of State. However, we all agree that European integration and unity is essential and that we want to continue Europe as a Union. Only a strong community will be able to face up to the global challenges of our time. The effects of climate change, terrorism, economic globalisation, and migration do not stop at national borders. We will only meet these challenges successfully and continue on the road to economic and social cohesion and development by working together as equal partners at the institutional level.

We want a strong and integrated Europe

We thus need a strong European Union, a Union that has joint institutions, a Union that constantly reviews its work with a critical eye and is able to reform itself, a Union that is built on its citizens and on its Member States as a vital base.

This Europe needs a vibrant political debate on the best path forward into the future starting from the Rome Declaration of 25th March 2017 as a basis. Europe is able to withstand a very wide range of opinions and ideas. But there definitely must not be a return to a Europe in which countries are no longer equal partners but opponents.

Our united Europe needs a strong vote by the peoples. This is why we call on you to exercise your right to vote. It is our common European future that is on the ballot.

Rumen Radev
President of the Republic of Bulgaria

Frank-Walter Steinmeier
President of the Federal Republic of Germany

Kersti Kaljulaid
President of the Republic of Estonia

Kolinda Grabar-Kitarović
President of the Republic of Croatia

Nicos Anastasiades
President of the Republic of Cyprus

Dalia Grybauskaitė
President of the Republic of Lithuania

János Áder
President of the Republic of Hungary

George Vella
President of the Republic of Malta

Alexander Van der Bellen
President of the Republic of Austria

Andrzej Duda
President of the Republic of Poland

Sauli Niinistö
President of the Republic of Finland

Office of the President of Slovenia