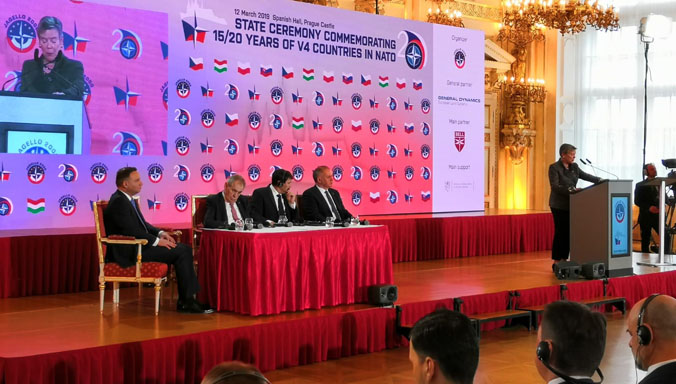 NATO Deputy Secretary General Rose Gottemoeller participated in a commemoration ceremony in Prague on Tuesday (12 March 2019) to mark the 15th and 20th anniversaries of the Visegrad countries joining NATO. The Deputy addressed the conference after President Miloš Zeman of the Czech Republic, President János Áder of Hungary, President Andrzej Duda of Poland and President Andrej Kiska of Slovakia.

In the afternoon, the Deputy delivered a keynote speech on “20 Years of NATO Enlargement” at the Defence and Security Conference in Prague. “We are here today in celebration of freedom and security – and in recognition of unity and progress,” she said. Gottemoeller noted that the Czech Republic, Hungary, Poland Slovakia joined NATO after decades of oppression, determined to forge a freer and more prosperous future for their citizens. “NATO believes that every country must be free to choose its own path, including with regard to its security agreements.

This is a sovereign decision for sovereign nations to take – and no one has the right to interfere,” she said. Gottemoeller also outlined the Alliance’s current security challenges, including Russia’s breach of the Intermediate-Range Nuclear Forces Treaty and instability in the Middle East and North Africa. She stressed that investments in and Allied unity are essential to keep NATO strong and prepared to meet new challenges from wherever they may come.